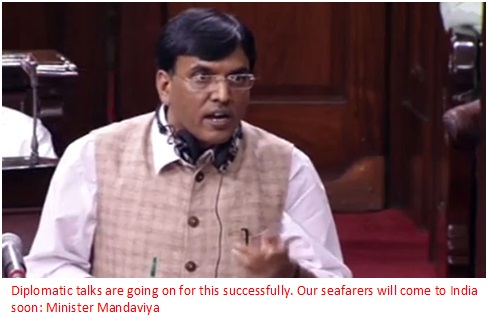 China on December 25 had said that there is no ‘link’ between stranded Indian ship crew on its Chinese ports and its strained relations with India and Australia.

Two cargo vessels with a total of 39 Indians on board have been on anchorage in Chinese waters as they were not allowed to unload their cargo though some other ships have managed to do so.

“Diplomatic talks are going on for this successfully. Our seafarers will come to India soon,” Ports, Shipping and Waterways Minister Mansukh Mandaviya said in reply to a query about sailors being stuck in China for the last seven months during Cabinet briefing..

“There is a considerable amount of stress on the crew members on account of this unprecedented situation,” External Affairs Ministry Spokesperson Anurag Srivastava had said.

Srivastava said bulk cargo vessel MV Jag Anand is on anchorage near Jingtang port in Hebei province of China since June 13 and it has 23 Indian sailors.

Another vessel, MV Anastasia with 16 Indian nationals as its crew, is on anchorage near Caofeidian port in China since September 20, waiting for discharge of its cargo, he had said at a media briefing.

“Our Embassy in Beijing has been in constant touch with provincial and central government authorities in China, requesting that the ships be allowed to dock and/or the crew be allowed to be changed,” he had said.

China has stayed in close communication with the Indian side

“Concerning this, China has stayed in close communication with the Indian side and responding to their requests as well as providing necessary assistance for them, Chinese Foreign Ministry spokesman Wang Wenbin  had said.

“As far as I understand, China allows the crew change while meeting certain quarantine conditions. But this Jingtang port is not in the list for such crew changes, he had said but did not refer to the 16 crew members of Caofeidian port.

China last month had blamed the freight forwarder of Jag Anand’ ship for the impasse, saying he is not letting the ship to leave.