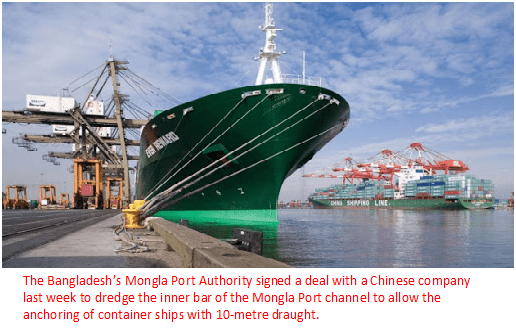 China takes up yet another port project in Bangladesh

The Bangladesh’s Mongla Port Authority signed a deal with a Chinese company last week to dredge the inner bar of the Mongla Port channel to allow the anchoring of container ships with 10-metre draught.

The dredging of the outer bar area of Mongla Port channel completed; soon to serve ships with 10-metre draught

Bangladesh’s State Minister for Shipping Khalid Mahmud Chowdhury, who joined the program online said: "The dredging of the outer bar area of Mongla Port channel has been completed with around Tk 700 crore and it is expected to serve ships with 10-metre draught soon." Ships have started sailing to and from the newly dredged channel on Mongla Port's outer bar.

"The completion of the dredging of the inner bar area of Mongla Port channel will shorten the turnaround time of ships arriving at the port while cutting the cost of transporting goods," Khalid Mahmud said. The number of ships arriving at Mongla Port will surge, playing a major part in the economic development of the south-west part of the country.

Mongla Port lies on the bank of the River Pashur. Due to the navigability problem of the Pashur channel, ships would first unload the containers at Chattogram Port and then come to Mongla Port after reducing the draught size. This lightening exercise increased the cost and time of cargo transportation to and from the Mongla Port. Hence the traders were reluctant to use Mongla Port for import and export of containerized goods.

The completion of the new project is expected to achieve the desired depth of channels which would vastly increase the navigability of the port.