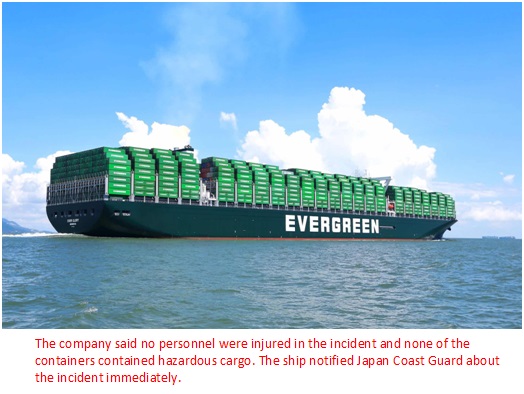 Taiwanese containerline Evergreen Marine has announced that 36 containers have fallen off its 2014-built post-panamax vessel Ever Liberal due to rough sea conditions.

The incident happened while the ship was en route to Los Angeles after leaving the Port of Busan.

21 containers fell onto the deck and 36 into the sea

According to the company, the 8,452 teu ship encountered strong winds off the south of Kyushu, Japan, causing the collapse of container stacks on the vessel. Twenty-one containers fell onto the deck, while 36 fell into the sea.

The company said no personnel were injured in the incident and none of the containers contained hazardous cargo. The ship notified Japan Coast Guard about the incident immediately.

Following the incident, the ship changed its course to Taipei for inspections and Evergreen said everything possible is being done to retrieve the lost containers.

Containers lost overboard represent less than one thousandth of 1% of the roughly 226 million containers currently shipped each year. Nevertheless, the liner shipping industry remains committedto continuing to partner with governments and other stakeholders to enhance container safety inorder to further reduce the number of containers lost at sea. World Shipping Council 2020 Update.