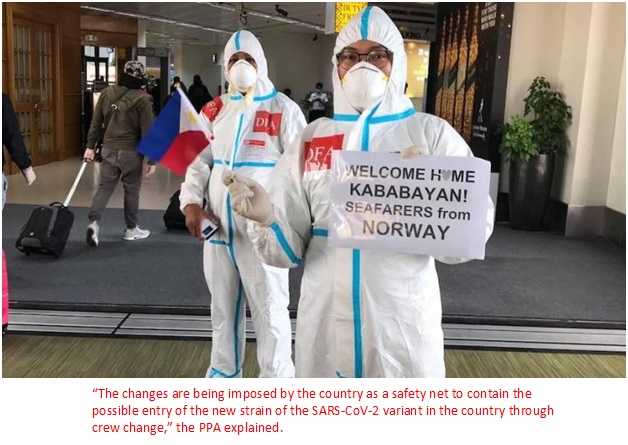 New strains of Covid-19 detected in the UK and South Africa are spooking immigration authorities around the world. The variants of the virus have been found to be far more contagious than the original Covid-19, and have quickly spread around the globe over the past month.

The Philippines decides to ban crew change thru to Jan 15

The Philippines, the world’s leading crewing provider and a top destination for crew changes during the pandemic, has decided to halt crew changes for seafarers who have been in 21 different countries around the world two weeks prior to visiting the Southeast Asian republic.

According to a post on Facebook, the Philippine Ports Authority (PPA) has decided to halt crew changes through to January 15 for any crew who have visited Australia, Canada, Denmark, France, Germany, Hong Kong, Iceland, Ireland, Israel, Italy, Japan, Lebanon, the Netherlands, Singapore, South Africa, South Korea, Spain, Sweden, Switzerland, the UK or the US recently.

Additional countries could be added to the list, the PPA warned.

“The changes are being imposed by the country as a safety net to contain the possible entry of the new strain of the SARS-CoV-2 variant in the country through crew change,” the PPA explained.

The temporary ban could be extended beyond the initial January 15 deadline, the PPA warned.