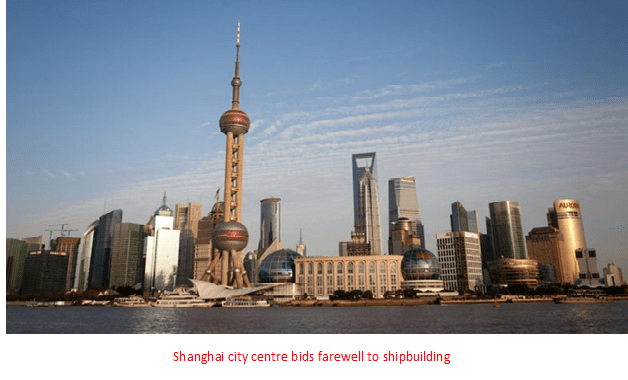 For more than a century visitors to Shanghai have been able to see deepsea ships in dock, under construction. This chapter of the city’s maritime heritage is set to close with news of final yard relocation.

State-run CSSC has commenced construction of a new mega yard on Changxing island, some 45km northeast of downtown Shanghai. Once finished in 2023, Hudong-Zhonghua, the last remaining shipbuilding yard in the city area, will relocate.

According to CSSC, the new yard to  become the one of the most technology-advanced shipyards in the world

According to CSSC, the new yard will adopt the latest smart shipbuilding technology and become the one of the most technology-advanced shipyards in the world. Total area of the yard is about 214 ha.

The group will invest RMB8bn ($1.24bn) for the phase one project and total investment of the project could reach RMB18bn.

The major shipyards in Shanghai have relocated en masse to Changxing island over the past 12 years, driven initially by the 2010 World Expo. Shanghai’s modern shipbuilding era dates back to 1865 with the creation of Jiagnan shipyard, which was originally established in the heart of the city.

CSSC’s two other yards in the area are Jiangnan, now also on Changxing island, and Waigaoqiao, located to the north of Pudong airport. Changxing is one of a number of islands in the Yangtze River delta that falls under the jurisdiction of the Shanghai municipal government.

In November, CSSC also commenced the construction of a new offshore wind yard in Qinzhou, Guangxi.