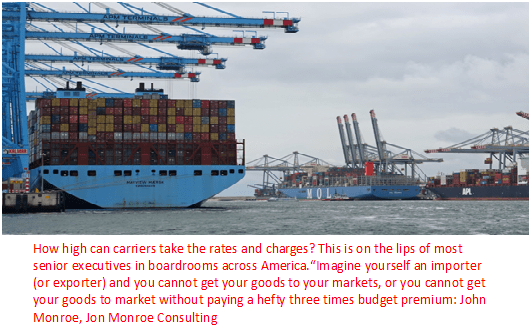 The final Shanghai Containerized Freight Index (SCFI) for 2020, published on 31 December, recorded a staggering 190% gain on the year.

The biggest spot rate increase on its major trade lanes was recorded between Asia and North Europe, which saw the SCFI component leap by almost 300% to finish the year at $4,091 per teu. Asia to Mediterranean rates also saw a big spike, 266%, to take the SCFI element to $4,286 per teu.

Meanwhile, container spot rates on the transpacific closed the year down on the previous week, possibly suggesting rates on the route may have peaked. For Asia to the US west coast, the SCFI recorded a fall of $61, to $4,018 per 40ft, and for the east coast a decline of $148 per 40ft, to $4,729.

Nevertheless, these rates represent a respective 180% and 86% increase in the SCFI over the 12 months pf 2020.

Lars Jensen, of SeaIntelligence, commented that the relatively “good news” for transpacific shippers was “not much comfort in a market where you have to pay extra to get equipment, not to mention problems with port congestion, delays and chassis availability”.

Several carriers announced $1,000 per 40ft GRI’s for 1 Jan; others increasing their rates from mid-month.

Despite the transpacific spot rate falls in the final week of the year, several carriers announced $1,000 per 40ft GRI’s for 1 January, with others increasing their rates from mid-month.

Moreover, due to the severe delays to berthing for vessels at Los Angeles and Long Beach – reportedly more than 30 ships were awaiting berths in the San Pedro Bay area over Christmas – carriers will also be ramping up their congestion surcharges.

Chassis and trucker shortages for shipments via the South California ports are also reported to be causing significant delays to container movements.

And there appears to be no let-up in the flood of imports destined for the US from Asia. According to the port of Los Angeles’ Signal forecaster, volumes expected this week are just under 160,000 teu, which is 45% higher than the same week of last year, while next week is predicted to be an astonishing 100% higher than a year ago, at 175,000 teu.

With the surge in demand boosted by e-commerce and medical supplies, John Monroe, founder of Washington state-based Jon Monroe Consulting, wondered: “How high can carriers take the rates and charges? This is on the lips of most senior executives in boardrooms across America.“Imagine yourself an importer (or exporter) and you cannot get your goods to your markets, or you cannot get your goods to market without paying a hefty three times budget premium,” said Mr Monroe