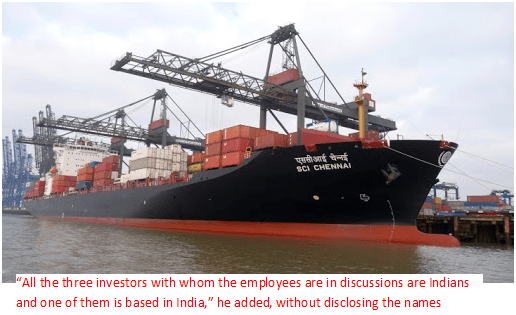 Around 400 serving and 200 former employees with the support of three Indian investors are considering a bid for Shipping Corporation of India Ltd, which has been lined up for privatisation by the government.

“It was decided on Monday, Jan 4, that employees will participate in the expression of interest issued by the government,” a person briefed on the matter said, asking not to be named.

“A working group formed for the purpose is preparing a roadmap on a potential bid; the structure of the bidding special purpose vehicle/consortia is being worked out,” a second person with knowledge of the discussions, said. He too declined to be named.

All three investors Indians, one of them based in India

“All the three investors with whom the employees are in discussions are Indians and one of them is based in India,” he added, without disclosing the names.

On December 22, the Department of Investment and Public Asset Management (DIPAM) invited expression of interest to privatise Shipping Corporation by selling the government’s 63.75 per cent stake to a strategic buyer.

Potential bidders have time until February 13 to file their interest.

The management/employees of SCI have been allowed to participate in the bid, if they meet the eligibility criteria, including a net worth of at least 2,000 crore, as applicable to other bidders, according to the preliminary information memorandum issued by DIPAM for the stake sale.