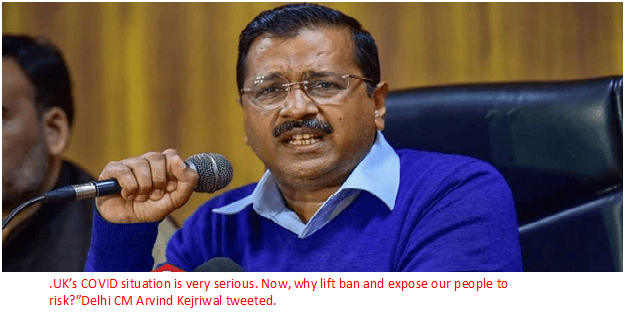 Delhi chief minister Arvind Kejriwal has urged the Centre to consider extending the ban on UK flights in view of the increasing corona cases caused by the UK's mutant strain in the country.

The first flight from the UK will arrive in India on January 8; flights no revised from 70 to 30 till Jan 23

The Centre partially lifted the ban and resumed India to UK flights from January 6. The first flight from the UK will arrive in India on January 8. The civil aviation ministry has revised the number of flights allowed to operate between India and the UK and brought down the number to 30, from 70 till January 23.

A detailed guideline has also been issued by the Union health ministry for passengers arriving in India from the UK. However, the Delhi CM took to Twitter and urged the Centre to not lift the ban until January 31.

After a new, possibly more contagious strain of Coronavirus was detected in the United Kingdom in December, several countries imposed a ban on flights from the UK. India, too, on December 21 announced an embargo on UK flights which was effective from December 23 to December 31. Later, it was extended to January 7

Why lift ban and expose our people to risk? Kejriwal tweeted

The Covid-19 situation in the United Kingdom is extremely serious, Delhi chief minister Arvind Kejriwal tweeted as he urged the Centre to reconsider the lifting of restrictions. “With great difficulty, people have brought Covid-19 situation in control. UK’s COVID situation is very serious. Now, why lift ban and expose our people to risk?” Kejriwal tweeted. As UK flights are mostly destined to Delhi and Mumbai, the caseload of the cities might get affected by the resumption of the flights.

Apart from Delhi and Mumbai Hyderabaad and Bengaluru airports also receive and sent flights to United Kingdom directly. Chennai airport has been taken out of the UK circuit by he government recently.

The UK on Wednesday recorded 1,041 deaths — the highest since the peak of the pandemic since April last year. The number of people who have tested positive for the new UK variant of virus in India has reached 73, according to the health ministry on Wednesday.