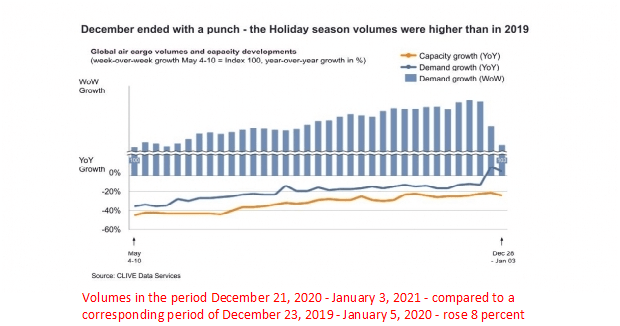 Despite no traditional peak season for global air cargo demand in Q4 2020, the year ended on a relatively high in December with the first positive year-on-year growth in weekly volumes in over 12 months, according to the latest industry statistics from analysts CLIVE Data Services and TAC Index.

Based on both the volume and weight perspectives of cargo flown and capacity available, the load factor reached a new high of 73 percent in mid-December, while week ending January 3 saw an unprecedented level for this time of year of 65 percent, 13 percent points above the corresponding week a year ago.

December data showed a continued closing of the gap in year-on-year volumes to -5 percent versus December 2019 - from a yearly low of -37 percent in April – as volumes rose 2.5 percent over November 2020. This produced an overall dynamic loadfactor for the last four weeks of December of 71 percent.

CLIVE Data Services’ first-to-market weekly analyses also recorded a 2 percent increase in available capacity in December compared to November, but this remained -21 percent against the level of freighter and bellyhold cargo space on offer in the last month of 2019.