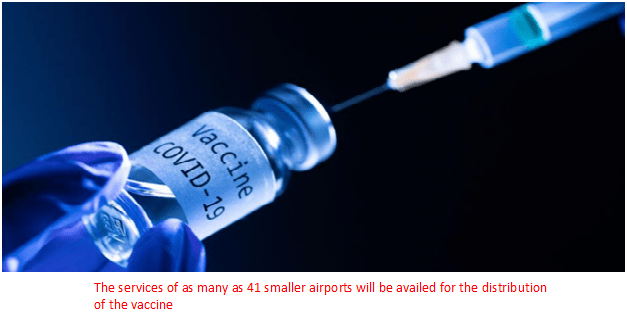 Pune, from where the Serum institute of India functions may become the central hub where the countrywide distribution of covid 19 vaccine will take place. The movement of vaccines may start in a day or two according to sources

The vaccines will be transported in regular passenger planes

The vaccines will be transported in regular passenger planes. Indian airforce may also participate in the exercise since Pune airport is under its control

Several mini hubs have been identified for the last mile connectivity. The services of as many as 41 smaller airports will be availed for the distribution of the vaccine .Delhi and Karnal have been designated as hubs for north while Kolkata and Guwahati will perform that role for eastern India.

Chennai and Hyderabad will take up this work for southern India. Top Tamil nadu government officials visited the central government's medical depot situated in central chennai to inspect the facilities.

The central government has held discussions with health and civil aviation ministries and all the stakeholders involved in the distribution exercise.