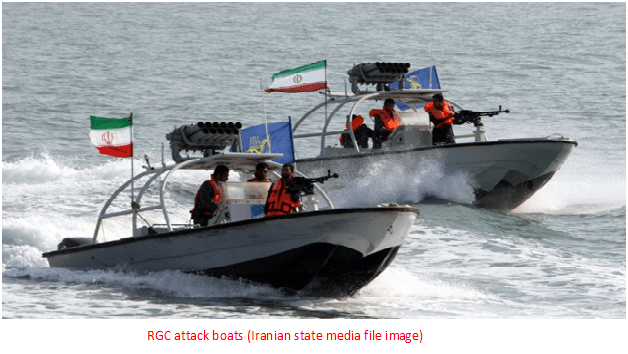 This week, Iran's Islamic Revolutionary Guard Corps (IRGC) held a mass naval parade just off Assaluyeh, a port city on the Persian Gulf. The timing of the announcement is unusual, following just after the seizure of a South Korean tanker on Monday and just before the arrival of a delegation of Korean negotiators.

IRGC's news outlet, Sepah News, reported that the organization held a mass parade off Assaluyeh with more than 700 "light and semi-heavy vessels." The head of the IRGC, Maj. Gen. Hossein Salami, and the head of the IRGC Navy, Admiral Alireza Tangsiri, were both in attendance.

According to Sapah News, the exercise was part of a week of events commemorating the first anniversary of the assassination of Qasem Soleimani, the IRGC's previous commander, who died in an American drone strike on January 3, 2020.

"The main message of this exercise is that both our armed forces and our people are always ready to defend the vital interests of this country, especially the azure waters of the Persian Gulf and the water borders of our Islamic homeland," said Maj. Gen. Salami in a statement.

IRGC forces seized the South Korean tanker Hankuk Chemi and its 20-man crew on January 4, the day after the anniversary of Soleimani's death. Iran claims that the seizure of the vessel was intended to prevent environmental pollution, but analysts have suggested that it is more about geopolitical messaging - and a possible attempt at an exchange. The South Korean government is in possession of $7 billion in Iranian funds, which were frozen when American sanctions were reimposed in 2018.

"If there is any hostage-taking, it is Korea's government that is holding $7 billion which belongs to us," Iranian government Ali Rabiei told a news conference earlier this week.

A team of negotiators from Seoul arrived in Tehran on Thursday Jan 7 to begin talks on the tanker's release.