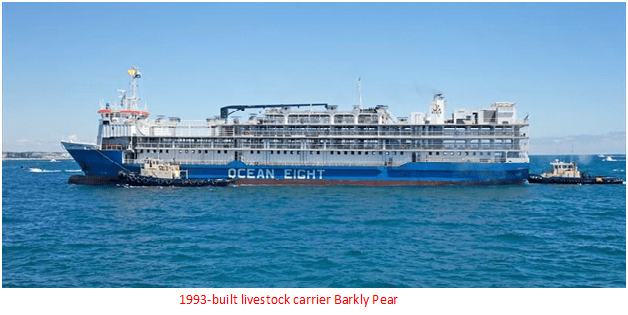 The Australian Maritime Safety Authority (AMSA) has banned the 1993-built livestock carrier Barkly Pearl from entering Australian waters for 24 months, the longest ban the AMSA has issued on a vessel.

The vessel was initially found travelling through Australia’s northern waters with major damage to its hull in November last year. It was then brought into the port of Geraldton following a tense operation to get the listing ship to shore.

AMSA ship inspectors since then worked with the vessel owners and operators to develop an appropriate repair solution, and the vessel was finally loaded onto the heavy load carrier Falcon to safely depart Australian waters yesterday.

The ship is controlled by Singapore-based Drako Shipping.

The Barkly Pearl was issued with a refusal of access direction notice, forbidding the vessel from entering or using an Australia port for 24 months.

“This is a significant decision by AMSA.  It’s the first time a vessel has been banned from Australian ports for this length of time and it will certainly affect the vessel’s commercial operations,” said AMSA’s general manger operations Allan Schwartz.

‘The owners and operators of the Barkly Pearl were negligent in their maintenance of the vessel, put the lives of the seafarers on board at risk and posed an immediate threat to Australia’s marine environment,” Schwartz added