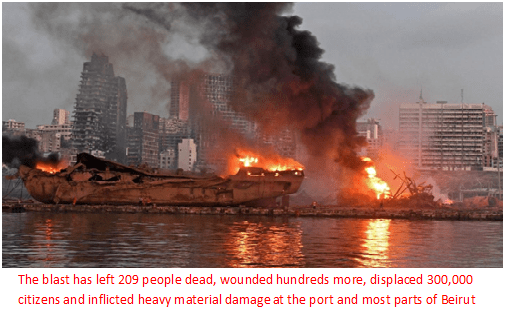 The World Bank Tuesday, Jan 5, estimated the cost of damage at Beirut Port from the Aug. 4, 2020 blast at $350 million, but insisted that reforming this facility should be one of the conditions before rebuilding it.

“Reforming Lebanon’s port sector is a prerequisite for building back a better Port of Beirut and revitalizing the Lebanese economy,” according to a new World Bank note that aims to provide guidance to policymakers on the crucial additional requirements for the rebuilding of the port.

RDNA estimated damage to PoB at about $350 million

“A Rapid Damage and Needs Assessment (RDNA), prepared by the World Bank in cooperation with the United Nations and the European Union, estimated damage to the PoB at about $350 million.” the note explained.

The cause of the explosion has not been established yet by the Lebanese authorities and prosecution office.

The blast has left 209 people dead, wounded hundreds more, displaced 300,000 citizens and inflicted heavy material damage at the port and most parts of Beirut.

Lebanon is seeking international assistance to rebuild Beirut Port but many European countries and international organizations are insisting on real reforms of this vital facility.

The blast has also exposed the inefficiencies, mismanagement and even rampant corruption at Beirut Port which was among the probable causes of the incident.

In its note titled “Reforming and Rebuilding Lebanon’s Port Sector: Lessons from Global Practices,” the World Bank underscored the importance of port governance and border management reforms, and offered a set of guiding principles to help inform port sector reforms in Lebanon and pave the way to rebuild a better PoB.

The note also draws on extensive consultations with public and private sector organizations, civil society, academia, and the diplomatic and donor communities.

“These failures are a direct result of the current mismanagement and lack of good governance of the Port” the World Bank indicated.

The World Bank added that one of the prerequisites to rebuild the port was the establishment of a robust institutional framework for the port sector.

“This framework will pave the way to rebuild a modern, transparent and efficient port and to restore trust of the Lebanese society and port users into its capacity to strengthen the economic fabric and provide support in overcoming the country’s economic crisis,” the paper said.

The World Bank proposed “a new governance structure based on the landlord port model; efficient and modern Customs, border agency and trade processes that have an essential role in addressing transparency, predictability and security issues; open and transparent bidding processes for selecting investors, operators or concessionaires; quality infrastructure that is contingent on a countrywide strategy for the port sector and a revised master plan for the Port of Beirut.”

“When effectively implemented in a transparent and participatory manner, these reforms would meet the demands and aspirations of the Lebanese people and all stakeholders toward the efficient functioning of the Port,” the note said