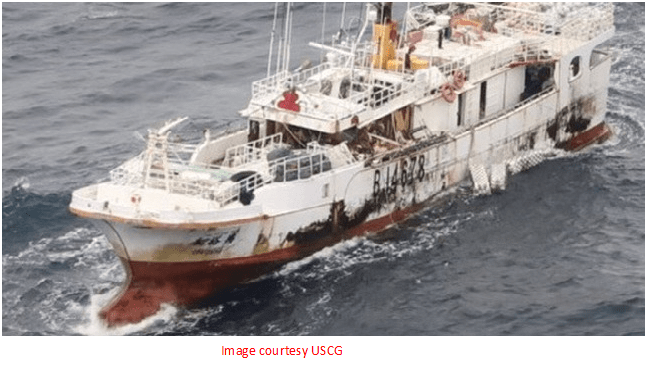 The search for the missing crew of the Taiwanese fishing vessel Yong Yu Sing No. 18 continues in a remote segment of the mid-Pacific.

The tuna longliner Yong Yu Sing No. 18 dropped out of contact with her owners in late December, just as a major storm system was approaching her area of operations. No distress call was ever received; her last AIS position showed her about 530 nm to the northeast of Midway Atoll, a former U.S. Navy airbase some 1,100 nm to the northwest of Honolulu.

Due to low fuel, the Hercules aircrew returned to base after taking imagery of the vessel

A Coast Guard Hercules long range search aircraft located the vessel adrift and apparently abandoned on January 2. One liferaft was missing, and the wheelhouse showed signs of damage. Poor weather conditions interfered with spotting any crew members aboard, and due to low fuel, the Hercules aircrew returned to base after taking imagery of the vessel.

The U.S. Coast Guard, the U.S. Navy, and several fishing vessels are still working with Taiwan's Rescue Coordination Center Taipei to search for the vessel's 10 crewmembers. Two Hercules long range SAR planes and one Navy P-8 Poseidon maritime patrol plane are scheduled to search the area on Friday. Good Samaritans aboard four fishing vessels are also nearing the search area; the AMVER-enrolled boxship OOCL Tokyo contributed early in the response and has since continued on her commercial voyage.

Partnerships are key when it comes to challenging long range search; the search zone thousands of miles

“Partnerships are key when it comes to challenging long range search and rescue cases like this,” said Cmdr. Scott Higbee, a Joint Rescue Coordination Center Honolulu search and rescue mission coordinator. “With the help of our international partners and the Navy, we have been able to sustain daily searches and are able to cover a much larger area than if we were relying on Coast Guard crews alone. This is especially important in the Pacific where the search zone may be thousands of miles from first responders.”