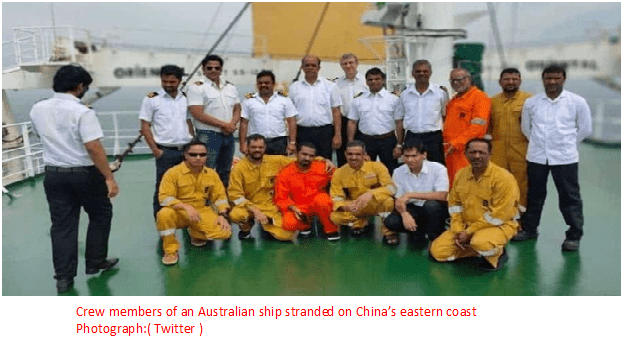 As Six months have passed since about forty Indian sailors stuck on two floating prisons, the ships outside the Chinese ports, India has stepped up pressure through diplomatic channels with its Chinese counterparts in an effort to release them from imposed custody.

India's Ambassador to China VikramMisri met his chinese counterparts and suggested a way out of the crisis. He urged the Chinese authorities to permit crew change so that the held up ones are released and replaced by fresh crew.

The External Affairs Ministry is also in touch with the Chinese Embassy in New Delhi in this regard. The trade row between China and Australia has led to the hold of ships carrying Australian cargo, mostly thermal coal, outside the Chinese Ports for the past several months.

Meanwhile in a move to break the deadlock, industrialist Naveen Jindal has offered to buy the coal on the ships so that the sailors could be moved to Indian ports along with other cargo. In view of the strict pandemic control measures, the Chinese authorities have outlined detailed steps for smooth movement of crew.

Beyond the 40 odd Indian sailors held up in two ships, there are hundreds of other Indian sea men held up outside the chinese ports. Their issues have not come up before the radar of the external affairs ministry so far say the Industry sources.