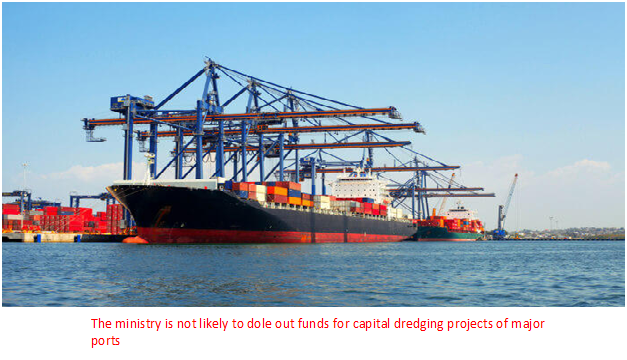 The Port and Shipping Ministry has advised Government owned Major ports to deepen their berths to at least 17 meters through Public Private Partnership route so that they are in a position to handle higher capacity container vessels.

Deep draft ports like most in the west coast particularly in Gujarat and Maharashtra would facilitate reduction in transporation costs due to economics of scale. In comparison most of the East coast ports have drafts ranging from 13 to 15 meters. The deepest berth in VOC port is around 14 meters.

Draft Dredging Guidelines for Major Port Trusts by the Ministry

The Ministry of Ports, Shipping  has prepared the Draft Dredging Guidelines for Major Port Trusts, which envisage the public-private partnership (PPP) model for undertaking channel deepening and maintenance works at the Major Ports.  This means the ministry will no longer dole out funds for capital dredging projects of major ports

Such a model may be worked out for dredging projects, with the hybrid model of combining capital dredging with maintenance dredging for 10-20 years.

The Ministry has emphasised the need to increase depths to 17 metres to handle higher capacity container vessels, which would facilitate a reduction in transportation costs due to economies of scale. The PPP model is a potential option, with limited investment from the Major Ports, the Ministry said.

Shipping experts says not many private players may not invest funds in east coast ports since most of them have become feeder ports and large liner vessels do not come in a big way, since the ports have limited infrastructure besides shallow draft.  It is like chicken and egg story. Unless the government invests funds and deepen the draft, the east coast ports will remain feeder ports depending on Coploimbo port for their major operations.

They also point out that the container terminals in  Ports like Colombo have both massive lengths and drafts of 20 meters. Unless the infra in east coast ports are improved, they cannot compete with the Sri Lankan port and continue to depend on it for transshipment operations.