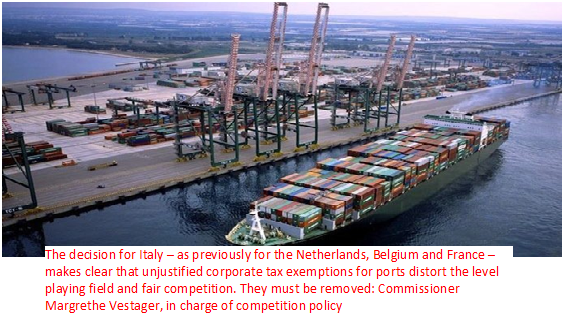 The Italian government has dismissed accusations of state aid linked to tax exemptions to local ports. Italy’s transport minister Paola De Micheli has announced her intention to oppose Brussels’s decision to clamp down on the tax exemptions and will now take the case to the European Court of Justice.

The objective is to maintain the current model which puts local ports as public infrastructure managed by authorities which are neither a private company nor players somehow active in the market.

One month ago Brussels made public the decision to put an end to tax exemptions on Italian ports.

“The European Commission has required Italy to abolish the corporate tax exemptions granted to its ports, in order to align its tax regime with EU state aid rules. Profits earned by port authorities from economic activities must be taxed under normal national corporate tax laws to avoid distortions of competition” a statement explained.

Commissioner Margrethe Vestager, in charge of competition policy, also said: “EU competition rules recognise the relevance of ports for economic growth and regional development, allowing member States to invest in them. At the same time, to preserve competition, the Commission needs to ensure that, if port authorities generate profits from economic activities, they are taxed in the same way as other companies. The decision for Italy – as previously for the Netherlands, Belgium and France – makes clear that unjustified corporate tax exemptions for ports distort the level playing field and fair competition. They must be removed.”