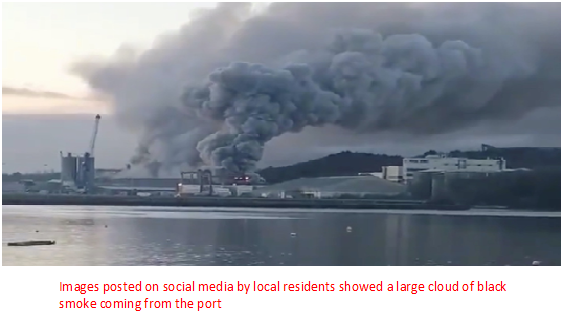 Large Fire at Ireland’s Port of Cork Brought under Control

Firefighters have brought a large fire at the southern Irish port of Cork under control and no casualties were reported, the port authority, which recently started offering more “Brexit-proof” direct sailings to mainland Europe, said on Saturday Jan 9.

The blaze began in a grain store; brought under control an hour later

The blaze began in a grain store at a deepwater berth used for freight services, the port authority said shortly after 0930 GMT, urging local residents to keep all doors and windows shut and remain indoors.

It said just over an hour later that the fire was under control.

“Emergency services remain on site to monitor the area. Ship operations in Ringaskiddy (Deepwater Berth) have been suspended,” the port authority said on Twitter.

Images posted on social media by local residents showed a large cloud of black smoke coming from the port.

Ferry companies have increased direct freight services between Ireland and France in response to demand for an alternative route to the British “land-bridge” used by around 3,000 lorries each week to ship goods to and from mainland Europe.