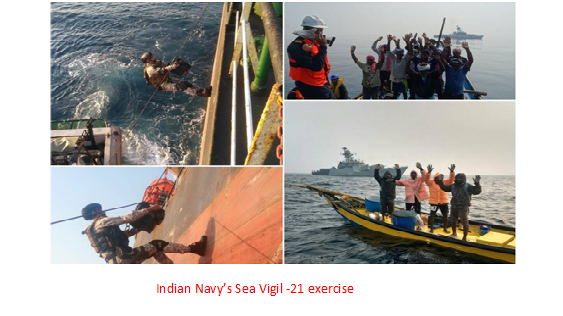 The Second Edition of the biennial pan-India coastal defence exercise ‘Sea Vigil-21’ will be conducted on 12-13 January 2021.

The exercise, inaugural  edition of which was conducted in January 2019; will be undertaken along the entire 7516 km coastline and Exclusive Economic Zone of India and will involve all the 13 coastal States and Union Territories along with other maritime stakeholders, including the fishing and coastal communities.

The exercise is being coordinated by the Indian Navy. The entire coastal security set up was reorganised after the 26/11 Terror attack at Mumbai which was launched via the sea route.

The exercise is unprecedented in terms of the geographical extent

The exercise is a build up towards the major Theatre level exercise TROPEX [Theatre-level Readiness Operational Exercise] which Indian Navy conducts every two years. SEA VIGIL and TROPEX together will cover the entire spectrum of maritime security challenges, including transition from peace to conflict.

Assets of the Indian Navy, Coast Guard, Customs and other maritime agencies will participate in SEA VIGIL, the conduct of which is also being facilitated by the Ministries of Defence, Home Affairs, Shipping, Petroleum and Natural Gas, Fisheries, Customs, State Governments and other agencies of Centre/ State.

While smaller scale exercises are conducted in coastal states regularly, including combined exercises amongst adjoining states, the conduct of a security exercise at national-level is aimed to serve a larger purpose. It provides opportunity, at the apex level, to assess our preparedness in the domain of maritime security and coastal defence.  Exercise ‘SEA VIGIL 21’ will provide a realistic assessment of our strengths and weaknesses and thus will help in further strengthening maritime and national security.