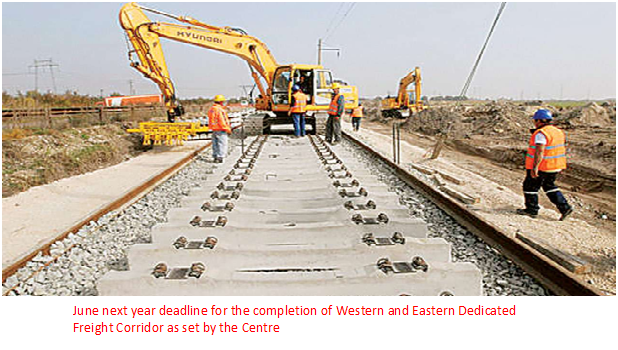 The Central Government has set June next year as the deadline for the completion of the Western and Eastern Dedicated Freight Corridor which will see a major shift of manufacturing sector to Western Northern states of the country.

The corridor project regularly monitored by the Prime Minister’s office

The deadline was set by the government after railway minister Piyush Goyal reviewed the progress of the various sections of the corridor for the second time within a week. The corridor project is also being regularly monitored by the Prime Minister’s office.

Railway officials gave inputs about the progress being made in all the sections and also some of the challenges being faced by the Railways in getting work completed in certain sections. The Minister said that project needs to be monitored on a Daily basis to ensure that completed project is handed over by June 2022

The Minister said that as the project completion gathers momentum , emphasis also needs to be given on development of freight terminals along the Corridor to be boost business operations for all stake holders.

In the first phase, DFCCIL is constructing the Western DFC (1504 Route km) and Eastern DFC (1856 route km including PPP section of Sonnagar-Dankuni Section.

The Eastern Dedicated Freight Corridor starting from Sahnewal near Ludhiana (Punjab) will pass through the states of Punjab, Haryana, Uttar Pradesh, Bihar and Jharkhand to terminate at Dankuni in West Bengal. The Western Corridor connecting Dadri in Uttar Pradesh to Jawaharlal Nehru Port (JNPT) in Mumbai will traverse through the states of UP, Haryana, Rajasthan, Gujarat and Maharashtra of WDFC & EDFC (excluding the Sonnagar – Dankuni PPP section) i.e. 2800 route Km will be commissioned by June 2022.

Dedicated Freight corridor is being seen as a game changer in Economic Development of certain parts of India.