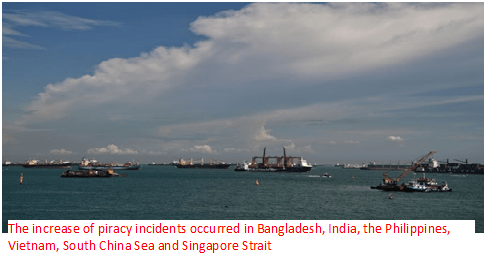 There was a total of 97 incidents of piracy and armed robbery reported in Asia during the calendar year 2020, comprising 95 actual incidents and 2 attempted incidents.  This represents an increase of 17 per cent in the total number of incidents and a 32 per cent increase in actual incidents, compared to 2019 according to the annual report of ReCAAP information sharing centre, the Singapore based anti piracy group.

Of the 97 incidents, 93 were armed robbery against ships, while 4 were piracy.

Despite the increase of incidents, the severity level of incidents (violence to crew, stolen items) remained moderate. There was one CAT1 (the most severe) incident, while 74 per cent of incidents were CAT4 (perpetrators not armed and crew not harmed).

A total of 34 incidents (compared to 31 in 2019) occurred in the Singapore Strait, of which 30 occurred in eastbound lane of the Traffic Separation Scheme (TSS).

Some perpetrators were arrested in Bangladesh, India, Indonesia, the Philippines and the Singapore Strait.

The Annual Report 2020 was released at the 12th Nautical

“The COVID-19 pandemic has reinforced the importance of shipping for global trade. The 32% year-on-year increase in the actual incidents in 2020 is a stark reminder that more needs be done to enhance the safety of maritime transport and safeguard the well-being of crew,” said Mr. Masafumi Kuroki, Executive Director of ReCAAP ISC.

“Beyond vigilance, timely reporting by ships, enhanced patrol by enforcement agencies, as well as cooperation between littoral States, we believe that arrest and bringing perpetrators to justice is an essential deterrence to stop the increase of incidents.  We urge the littoral States to take seriously petty theft and sea robbery because leaving criminals to continue their crime with impunity will only embolden them to escalate their acts,” concluded Mr. Masafumi Kuroki.