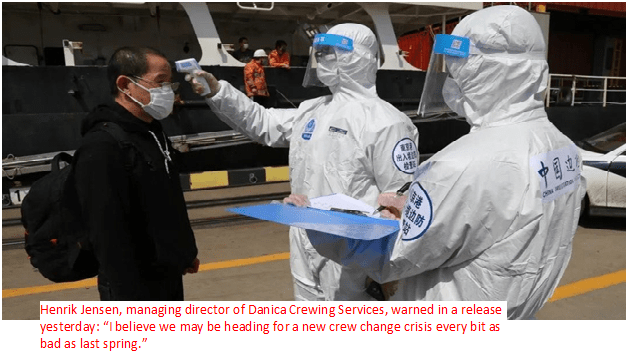 Crew changes are once more becoming difficult as much of the world locks down again following the emergence of several new and more transmissible variants of Covid-19, crew specialist Danica has warned.

Airlines are once again cancelling or reducing flights which poses a problem for crew transiting to vessels. Ports too, if they have reopened, are imposing greater restrictions.

We are looking at some hard months ahead

By way of an example of the tougher travel restrictions coming into place, the Philippine Ports Authority has extended its crew change restrictions.

The Philippines, which previously had been touting itself as a crew change hub during the pandemic, introduced a ban for ships bound for the country for crew change purposes if the ships had visited a number of countries in the 14 days to entering Philippine waters. The deadline for this ban, initially flagged as Jan 15 today, has now been extended to the end of the month, and two more countries have been added to the rapidly growing number of barred countries, namely Hungary and the United Arab Emirates.

A total of 35 countries are now on the barred list in Manila.

Henrik Jensen, managing director of Danica Crewing Services, warned in a release yesterday: “I believe we may be heading for a new crew change crisis every bit as bad as last spring.”

Requiring Covid-19 tests at a set period before travel isn’t always easy to comply with depending on where the crew change is being effected from, Jensen pointed out. Tests may not be available at short notice and there may not be available accommodation in which to isolate crew members while they await the results.

“The new, more infectious variants present a higher risk that a crew member may be infected on the way to the vessel and transfer the infection to his ship mates onboard. This a particular concern during air travel, which requires crew to spend many hours in a contained space with large numbers of other people. Due to all the flight cancellations there are plenty of aircraft available to lease for private transits but this option is really only economically viable if there are large numbers of crew which is not usually the case,” Jensen said, going on to describe how in some cases Danica has had to abandon crew change plans if they involve a long transit or a high-risk area.

Greater implementation of the IMO’s crew change protocols instead of national rules could improve the situation but Jensen is not optimistic of this being a solution at present. He commented: “ I think that it may be a remote dream as we have local governments rules, rules in the transit airports/countries and individual airline rules, and I do not think it is realistic to expect all these parties to come together.”

Some hard months ahead

Concluding, Jensen predicted: “We are looking at some hard months ahead.”