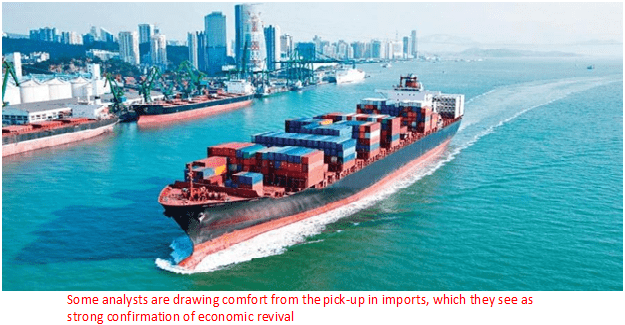 For the first time since February 2020 since Covid-19 virtually paralyzed the economy when the country’s exports and imports were in positive zone during December last year indicating that both trade and economic activity headed towards near normalcy.

India’s exports rose for the first time since September, increasing 0.1% to 27.2 billion US dollars in December as shipments of drugs and pharmaceuticals, electronics and Gems & Jewellery went up.

Early estimates had suggested that exports were 0.8 per cent lower at 26.9 billion US Dollars. Latest data released by the commerce department on Friday pegged imports at 42.6 billion US Dollars, 7.6 per cent higher than a year ago, which was in line with previous estimate.

Due to the revision, it will be the first time since February when exports and imports both are in positive zone, indicating that trade and economic activity seem to be headed towards pre-Covid levels. The change also means that trade deficit was estimated at 15.4 billion US dollars, the highest since January, when it was 15.2 billion US Dollars.

Some analysts are drawing comfort from the pick-up in imports, which they see as strong confirmation of economic revival, while others attributed it to pent-up demand. Barring crude, petroleum products, coal, silver, and transport equipment imports, most major segments reported an increase, according to government estimates. In case of petroleum products, the lower value was on account of a fall in prices in the international market compared to a year ago.