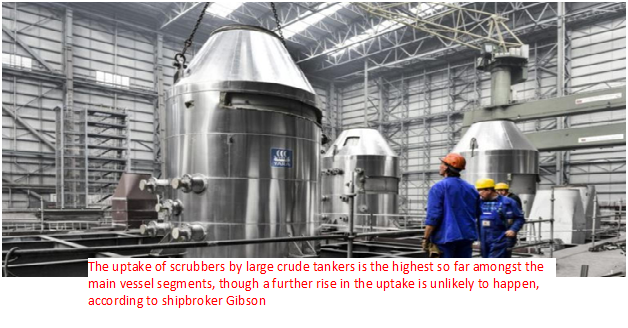 Scrubber penetration into the VLCC segment is the highest, with 31% of the existing VLCC fleet retrofitted with the exhaust gas cleaning system (EGCS) and 7% waiting for retrofitting. In addition, 32% of the current VLCC orderbook is expected to be installed with the technology.

“This means that close to 40% of the VLCC fleet could be scrubber fitted by the end of the year,” Gibson said in a recent report.

The regulatory scrutiny is also expected to intensify for scrubbers. By now, the list of ports where the use of scrubbers is banned is considered extensive, particularly on prohibiting the use of open-loop scrubbers.

Gibson observed that it may seem “inevitable” that the list of scrubber restrictions is only going to increase going forward.

“For now, however, while tanker supply/demand conditions remain severely unbalanced, even a modest scrubber premium could mean staying afloat and earnings above opex,” Gibson stated.

Indeed, scrubber economics have become position again with the spread between high sulphur fuel oil (HSFO) and very low sulphur fuel oil (VLSFO) having widened to around $80 to $100 per metric tonne (pmt) and scrubber savings climbing above $5,000 a day for VLCCs.

Prior to the onset of the Covid-19 pandemic, owners of scrubber tonnage had enjoyed a healthy discount for HSFO versus VLSFO, which averaged $250-300 pmt in key bunkering hubs during December 2019 to January 2020.