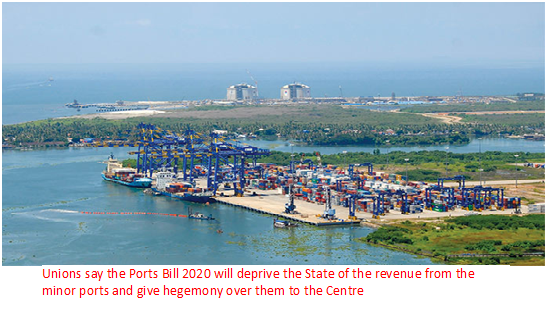 The Centre of Indian Trade Unions (CITU) said The Indian Ports Bill – 2020, proposed by the Centre will deprive the State governments of their power over minor ports.

Speaking to the media here on Sunday, Jan 17, CITU State president Ch. Narasinga Rao, city general secretary M. Jaggu Naidu and the national vice-president of the Water Transport Workers Federation V.S. Padmanabha Raju said the States would lose the revenue they are presently getting from the minor ports and the Centre would gain hegemony over them.

The takeover of the powers of the States by the Centre, is a violation of the federal spirit of the Constitution, they said. The State Maritime Boards have to function under the Maritime Port Regulatory Authority, appointed by the Centre. At present, the minor ports in the nine maritime states of the country are functioning under the State Maritime Boards through the respective State governments, the CITU leaders said.

Govt planning to hand over all ports to Adani Group

They alleged that the Union government was planning to hand over all the ports in the country to the Adani group. The Major Ports Authority Bill – 2020 was approved by the Lok Sabha and all the 11 Major Ports, including Visakhapatnam Port Trust, which were presently under the control of the Centre, would be handed over to the Adani group, they alleged.

The CITU State committee has called upon all workers to observe a State-wide protest on January 20 demanding implementation of labour laws in Krishnapatnam Port and reinstatement of 500 workers, who they alleged were illegally dismissed from service