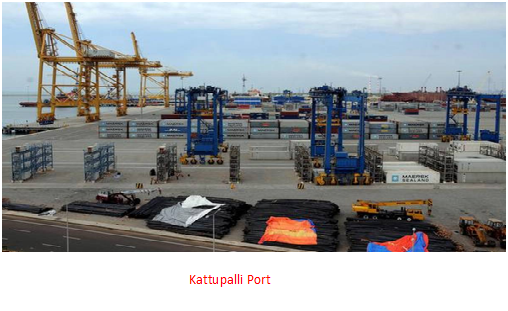 The Public hearing on environmental issues caused by the proposed development of Adani owned Katupalli port thirty kilometers north of Chennai scheduled on January 22 nd has been postponed indefinitely by the Tiruvallur District collector P Ponniah under whose jurisdiction the rs 50,000 crore expansion project is to take place.

He has invoked the crowds and corona the reasons for the postponement of the exercise.

The Port expansion project which will take the port's volumes by ten times to 350 million tons at one go had secured the clearance of Union government's Ministry of Environment recently.

The public hearing the next step was to take place at Minjur about thirty kilometers away from the project site on January 22. Environmentalists earlier wanted the hearing site to be taken closer to the project site. The entire opposition in the state were critical of the speed at which the project has been cleared by the central government unmindful of the environmental consequences to the fragile coastal area.

Following public outcry, Tiruvallur district collector P Ponniah  announced that the public hearing for the proposed development of Kattupalli Port scheduled on January 22 at Minjur has been postponed for a later date. He cited the gathering of crowd and COVID protocol as the reason.

The Collector said the public hearing which was scheduled on January 22 at Bhagavaan Mahaveer Auditorium, Shree Chandraprabhu Jain College, Minjur, has been postponed because “members of the public are expected to gather at the venue and it’s against COVID protocols, according to an official release from his Office.

The public hearing will be conducted on a later date, which will be intimated in due course.”

Environmentalists welcome the decision of the govt to postpone public hearing

G Sunderrajan of Poovulagin Nanbargal, a leading environmentalist group in the state has welcomed the government’s decision to cancel the public hearing. He had petitioned the Tamil Nadu Pollution Control Board seeking the cancellation stating that the proposed location of the port on a barrier island violates the coastal regulatory zone notification. “The State Coastal Zone Management Authority and TNPCB, as regulators, cannot be a party to facilitating a violation. The proposal should be returned immediately,” it said.

Nityanand Jayaraman, an environmental activist was quoted by the local media as saying that the project is set to come upon wetlands and ecologically fragile sand dunes on the Kattupalli Barrier island near the Pulicat Wildlife Sanctuary. The company’s proposal for a mega port is illegal on several counts, he contended.

DMK MP K Kanimozhi said that the plan that Adani Ports submitted to develop Kattupalli port contains major issues that the government needs to carefully assess. The government shouldn’t take flooding, ecological damage and threats to the livelihood of the local population lightly.

Tamil Nadu needs to invest in industrial development, but it can’t come at the cost to ecology and the environment. MDMK and CPI (M) also opposed the port expansion project