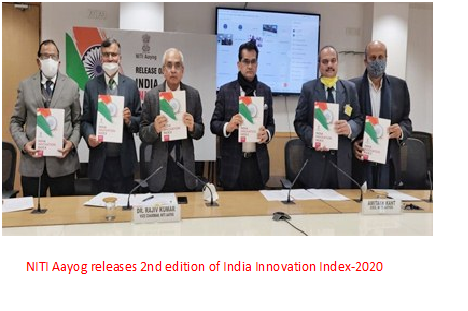 Karnataka has retained its top position among the major states category in Niti Aayog’s India Innovation Index ranking released on January 20th, while Tamil Nadu has lost to Maharashtra   the second place followed by Telangana, Kerala, Haryana, Andhra Pradesh, Gujarat, Uttar Pradesh and Punjab. The status of Tamil Nadu among the states is not immediately known.

“The second edition of the index will allow states to continue to evaluate their innovation environment and assess their progress. The division of innovation into two dimensions, namely innovation capabilities (Enablers) and innovation outcomes (Performance) will give the states a better perspective for identifying the critical focus areas.,” he added.

The last edition of the India Innovation Index, released in October 2019, was a first-of-its-kind matric for assessing the innovation capabilities of Indian states and Union Territories.

With the pandemic economic shutdown, the role of innovation to revitalise the economy, has never been more important

“Since then, India, and the world, have undergone a tectonic shift due to the Covid-19 pandemic. With the pandemic triggering an economic shutdown, the role of innovation to revitalise the economy, has never been more important,” the report said.

The 2020 edition builds on the previous year’s methodology by introducing more metrics to provide a more holistic outlook of the Indian economy. The framework is updated to include globally considered parameters for measuring innovation, such as the percentage of GDP spent on research and development, while keeping them specific to the Indian economy, it noted.

Niti Aayog CEO Amitabh Kant said, “I hope that the India Innovation Index 2020 can help the country in recognising the key areas of developmental intervention, with innovation as the central driver for growth. NITI Aayog will continue to take such initiatives that play a significant role in promoting cooperative and competitive federalism.”