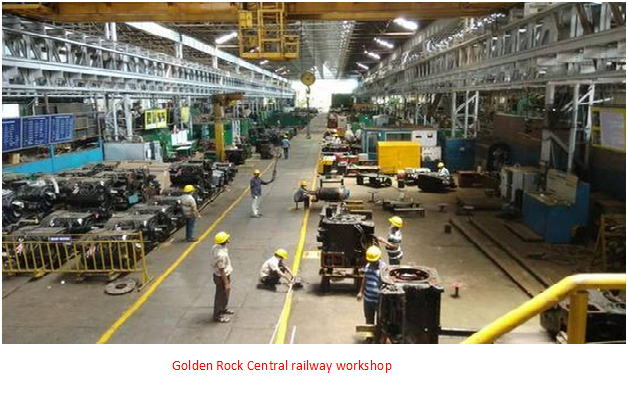 The workshop is also now having CONCOR order

The workshop is also now having CONCOR order for the manufacturing of 1035 BLCS wagons for carrying double stack containers at 100 kmph for which production has been commenced.

Due to the team’s extra ordinary efforts during the lock down period, 275 wagons were manufactured against Railway board's Rolling stock program orders and dispatched within eight months. In this, 200 are BOXNHL wagons and 75 are BVCM wagons. This is the highest ever production in a single financial year in the last seventeen years with still 2½ months to go for the completion of 2020-21.

To mark this achievement in the history of Goldenrock Workshop, 200th BOXNHL wagon and 275th Railways Board’s RSP order wagon were flagged off today in the presence of Shri. Shyamadhar Ram, Chief Workshop Manager, Shri. A. Clement Barnabas, Dy. Chief Mechanical Engineer and other Officers, Supervisors and Staff. Shri. Adapala Chandrasekhar, Asst. Works Manager, who has immensely contributed in Wagon Production this year, proposed the vote of thanks.

The financial year 2020-2021 had one of the toughest beginnings for any manufacturing unit. First full month was under lock down and the second month was partially opened. In spite of the pandemic situation, Staff, Supervisors and Officers of Wagon Production Shops rammed up their manufacturing activities.

The workshop has also carved a niche in undertaking prototype wagons owing to its superior quality of workmanship. Prototypes of newly designed and developed wagons by Research Designs & Standards Organisation, Lucknow are manufactured here. In the last two decades, 17 prototype wagons were manufactured and successfully tested before permitting for mass production.

Established in 1926, Central Workshops, Southern Railway, Goldenrock in Tiruchchirappalli is one of the premier Railway repair workshops in Indian Railways. Since 1961, this workshop is one of the four railway owned units involved in the production of new wagons catering to freight services across the country.

In the last 59 years, more than 40000 wagons of 55 types were manufactured here. In this, three are Narrow Gauge models, seven are Metre Gauge varieties and forty-five are Broad Gauge types. In addition, this workshop has been manufacturing container wagons for transhipping containers for Container Corporation of India.