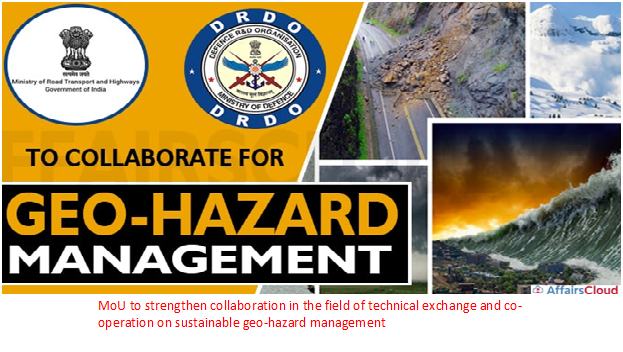 The Ministry of Road Transport and High ways and the Defense Research and Development Organisation would jointly conduct detailed investigations of the existing critical avalanches and geo hazards such as landslides,slope instability and sinking problems especially in the himalayan region

Both the government organistions have decided to go in for planning, designing and formuation of sustainable mitigation measures for the geo hazards on the National highways including tunnels. They would also jointly supervise and monitor the mitigatory measures during its implementation

MoRTH and DRDO to collaborate on sustainable geo-hazard management

It has been agreed that MoRTH and DRDO will co-operate in the areas of mutual benefit  including, conceptual planning of integrated avalanche/landslide protection schemes for all weather connectivity in snow bound areas of our country including pre-feasibility of tunnels and viaducts, planning and designing of various avalanche/landslide control structures, association in preparation of proposals/DPRs for tunnels including geological/geotechnical/terrain modeling and other related aspects of tunnels etc. This initiative will ensure safety of road users on NHs in the country against the adverse effects of landslides and other natural calamities.

DRDO is an apex organization of our country working on various cutting edge technologies. Defence Geo-Informatics Research Establishment (DGRE), a premier laboratory of DRDO, is leader in the development of critical technologies for enhancing combat effectiveness with a focus on terrain and avalanches. The role and charter of this establishment is mapping, forecasting, monitoring, control and mitigation of landslides and avalanches in Himalayan terrain.

MoRTH responsible to develop and maintain NH across the country

Ministry of Road Transport & Highways (MoRTH), Government of India is responsible for development & maintenance of National Highways across the country. It has been agreed by both the organizations to utilize the expertise of DRDO (through DGRE) in providing sustainable mitigation measures to damages caused by landslides, avalanche and other natural factors on various National Highways in the Country.