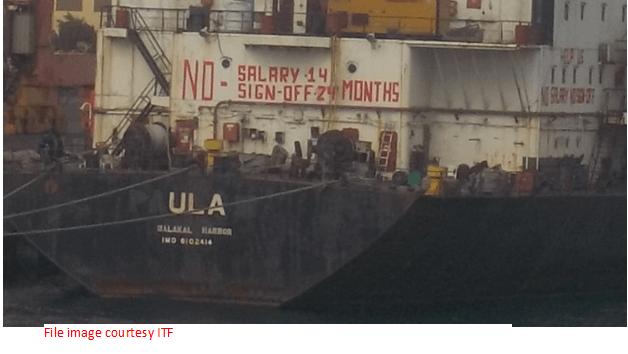 19 seafarers aboard the 1982-built bulker Ula have launched a hunger strike to protest their abandonment at the port of Shuaiba, Kuwait.

The crew is demanding back pay totaling more than $400,000

The crew is demanding back pay totaling more than $400,000, along with immediate repatriation. Since January 7, they have refused all food, and they told the ITF that they will not eat while they have no wages to feed their families. Six have already been hospitalized for treatment and returned to the ship.

“The crew has been on board the vessel for 14 months – some for longer than 19 months. One has been 26 months on board. They are asking Kuwait [the port state] to replace them with local crew, so that they can go home to their families.” said Mohamed Arrachedi, regional coordinator for the International Transport Workers’ Federation. “They have not been paid for 11 months.”

The ITF continued pushing for back pay, and the owner came forward with some of the money owed to the crew

ITF has been in contact with the ship's Qatari owner since September 2019, and it has tried to secure the crew's wages and the basic supplies necessary for their wellbeing. When Arrachedi first got a call for help from the crew, the Ula was in Iran, and she had no fuel and little food and water. The ITF continued pushing for back pay, and the owner came forward with some of the money owed to the crew. In April 2020, the ITF pushed for the vessel to be allowed to call at Shuaiba, Kuwait, where it has remained since. The crew have not been allowed ashore.

Wage payments stopped for a third time, and the situation on board grew tense.

Wage payments stopped for a third time, and the situation on board grew tense. The master contacted Kuwaiti authorities and the vessel's flag state, Palau, and reported a mutiny. Four crewmembers reportedly had to be locked in their cabins.

In May 2020, Kuwaiti officials discovered that the shipowning company's chairman was a fugitive sought by law enforcement officials in Qatar. After discussion, Palau decided to deflag the vessel, putting the full responsibility for the management of the case on Kuwait, according to ITF.

Six crew signed off without pay in September; 19 more remain on board

Six crew signed off without pay in September, but 19 more remain on board. While local maritime officials have provided them with basic necessities, they still have not been paid and have been unable to support their families, ITF reported. With their hunger strike well into its third week, they increasingly run the risk of a fatal outcome.

Lives are at risk

“Lives are at risk. We believe the Kuwaiti authorities have sufficient instruments to take the exceptional steps needed to ensure the crew are paid and repatriated. The ITF is on standby to assist in any way we can," Arrachedi said.