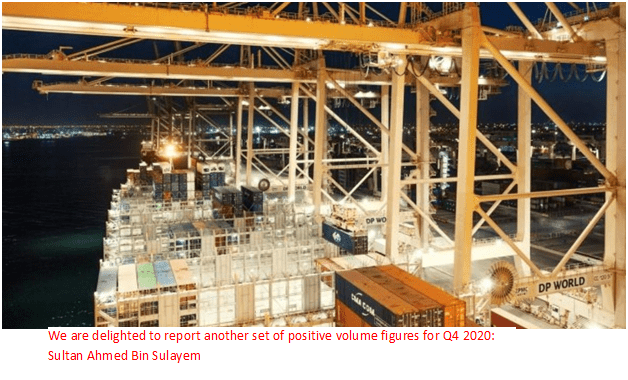 India, Europe, Middle East & Africa and Americas have driven DP World’s gross container volumes in the fourth quarter of last year with the global operator handling 19.1 million TEU, which is a 7.6% year-on-year increase.

However, DP World’s chairman and CEO Sultan Ahmed Bin Sulayem believes that despite the encouraging start to 2021, the outlook of the current year remains uncertain given the continued Covid-19 pandemic issues, geopolitical uncertainty in some parts of the world and the ongoing trade war, between China and the US.

In particular, DP World reported strong performances in Mundra, London Gateway, Rotterdam, Antwerp Gateway, Sokhna, Santos and Vancouver, while the company’s flagship port of Jebel Ali moved 3.4 million TEU in the last quarter of 2020.In addition, the UAE-based firm has announced that on a full year 2020 basis, it has handled 71.2 million TEU, year-on-year.

“We are delighted to report another set of positive volume figures for Q4 2020. This strong end to the year resulted in flat growth in 2020 which compares favourably against an industry that is estimated to be down 2.1%,” commented Sultan Ahmed Bin Sulayem.

“Overall, this once again illustrates the resilience of the global container industry, and DP World’s continued ability to outperform the market,” he went on to note, “We remain focused on containing costs to protect profitability, managing growth capex to preserve cashflow and are confident of meeting our 2022 targets.”

DP World’s boss added that the company will continue to invest selectively in projects that offer value such as Dakar (Senegal) and Luanda (Angola). “Our strategy to provide solutions to cargo owners has served us well, and our aim is to continue to build on this momentum,” he said in the announcement.