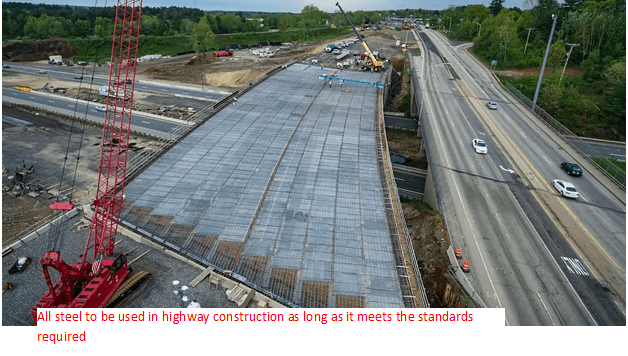 All types of steel to be used for highways

Union Government 15 Feb 21 announced that the Ministry of Road Transport and Highways has issued orders that all types of steel will be allowed for the construction of highways in the country.

All steel allowed if it meets specific standards required

“The steel proposed to be used would be tested in NABL-accredited laboratories as a third party check before approval. The move is based on the analysis and discussions with stakeholders and also technical opinion,” the statement further added.

Earlier, the contract provisions required use of steel produced by primary/integrated steel producers only. In view of the increase in steel prices, which can impact the cost of building national highways, Union Minister for Road Transport & Highways, Nitin Gadkari had suggested the need to re-look at all conditions which could be restrictive, without impacting the quality of material used for highway construction.

Reducing cost using new technology, the effort of the Ministry

With this step, the supplier base for steel used in the construction of national highways would increase, leading to more competition and better price discovery by the markets. This is also part of the continuous effort by the Minister to reduce costs through use of new technology, reducing restrictions on suppliers and making the procurement system transparent