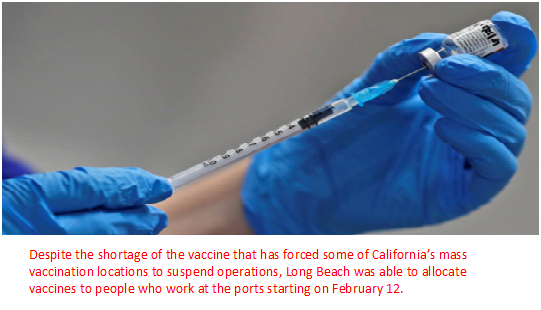 After repeated calls to add the dockworkers at the ports of Long Beach and Los Angeles to the priority groups for the COVID-19 vaccine, California authorities agreed and released the first batch of vaccines for the frontline workers who are ensuring that cargo continues to flow through the ports. Despite the shortage of the vaccine that has forced some of California’s mass vaccination locations to suspend operations, Long Beach was able to allocate vaccines to people who work at the ports starting on February 12.

The Long Beach Department of Health and Human Services confirmed that it organized the clinic supplying 800 doses of the Moderna vaccine for the port workers.

Elected officials, union, and port executives had joined together calling on the state to include dockworkers in the list of frontline employees to ensure they could receive the vaccinations as the earliest possible date. The Los Angeles City Council had also approved a resolution calling on the mayor to vaccine the dockworkers.

Los Angeles health officials were sympathetic to the concerns acknowledging reports of community spread of the virus within the ports and its potential impact operations. They also acknowledge the essential nature of the work performed by the port employees to maintain commerce across the region, but their hands were largely tied by the state that prioritized groups for vaccinations. Further, after having experienced a surge in the virus in recent weeks, Los Angeles, like most parts of the U.S., was facing a shortage of the vaccine calling on the federal government to increase distribution to the hard-hit areas.