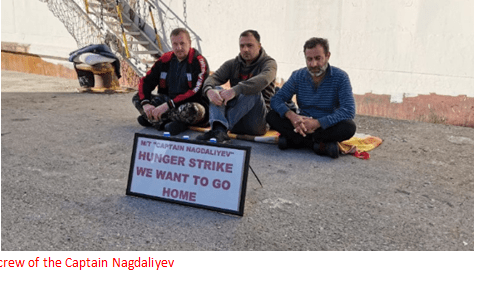 Abandoned Palmali crew are caught in an inhumane trap that Turkey can release: ITF

More than 50 seafarers remain trapped aboard vessels once owned by a Turkish billionaire whose jail and bankruptcy have left his employees without food, fuel and freedom for 10 months. But Turkey can save them.

The humanitarian effort to feed, repatriate and fight for the seafarers’ outstanding wages has been spearheaded by the International Transport Workers’ Federation (ITF) and its inspectors.

Turks have denied freedom for months, seafarers starved in darkness

In Istanbul, six ships owned by Palmali were abandoned at the port as the company went broke. Crews there were trapped on vessels for more than nine months as Turkish authorities refused to allow them to leave.

“It is grim,” said Steve Trowsdale, ITF’s Inspectorate Coordinator whose team have been working tirelessly to get the seafarers home. “These people are absolutely desperate. They have been low on food and water. Some ships had so little fuel that they had to live in blackout with no lighting.”

In contrast to refusals by Turkish authorities to support crews in their harbours with food, fuel and repatriation; seafarers have been treated considerably better on Palmali ships stranded in Italian ports.

For example, the Gobustan (IMO 9575321) was abandoned in Ravenna when Palmali collapsed. From July 2020 the crew were stranded for four months.

The ITF negotiated with the port, the insurers and other parties, and the crew of 13 were able to travel home at the end of September. The Gobustan’s crew gave their proxies to ITF lawyers to fight for unpaid salaries from the eventual sale of the ship. While the battle for wages continues, the ITF expects the seafarers to receive at least a share of their outstanding wages in due course, said Trowsdale.

“In the meantime, they have been home and able to get on with their lives. We want that for all the seafarers affected by Palmali’s collapse from Day One. They are entitled to their freedom,” he said.

Why is this happening? The ‘dark web’ of global shipping where no one is responsible for crew

ITF President Paddy Crumlin describes the global shipping industry as similar to the ‘dark web’ of the internet. Players are anonymous. Accountability is low. Who is responsible for crew is more often than not deliberately obscured.

The frustrating reality of this ‘dark web’ is laid bare when shipping companies go broke and seafarers are left with nothing.

At the heart of the problem is the flags of convenience system.

Trowsdale said if we got rid of flags of convenience — something ITF has advocated for many years — then a country’s fleet would be proportionate to its trading size and so it could bear the cost of proper regulation. Checks could be made on the quality of insurance that ship owners buy, for example, he said.

“That would mean speedy payouts if ships are abandoned, ensuring seafarers can get paid and they can get home quickly. Palmali has shown that seafarers are being left to languish with neither their freedom nor their wages.”