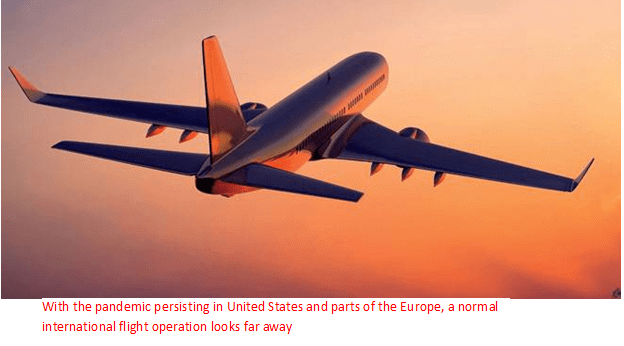 As many as 7.7 million passengers flew last month to destinations across the country according to the January traffic report released by civil aviation regulator Directorate of Civil Aviation (DGCA) on Thursday

Domestic air travel has recorded an upward trend since October, with a month-on-month increase in the number of passengers. .

India’s domestic passenger traffic slipped to a seven-year low in 2020 due to the nationwide lock down in the third week of March 2020. air services remained suspended for a couple of months

After commercial passenger flights resumed operations with restricted capacity on local routes, traffic increased from 45 per cent between June and September last year to 80 per cent in October 2020.

But the 7.7 million domestic passengers who had travelled in January 2021 is now where near the figures of corresponding period last year when it was nearly 13 million passengers

The load factor of IndiGo, SpiceJet, GoAir, Air India, Vistara and AirAsia India was between 65 and 70 per cent in January. Indigo flew the maximum number of passengers (4.2 million) followed by full-service carrier Vistara (0.9 million).

IndiGo also recorded the highest on-time performance (OTP) in January with an average 93.7% of its flights from four metro airports (Delhi, Mumbai, Bengaluru and Hyderabad). The budget carrier’s OTP was followed by Vistara and Air Asia.

Domestic traffic will not be able to go back to pre-Covid levels firstly, because domestic traffic also has an international component.  With the pandemic persisting in United States and parts of the Europe, a normal international flight operation looks far away. The international component in domestic air travel accounts for around 30 per cent according to aviation experts. “Currently we are operating maximum 100 flights under the government’s scheme, which is way below the original international flight numbers,” he said. “Not only Air India, but also foreign carriers who have tie-ups with domestic airlines are severely affected.”