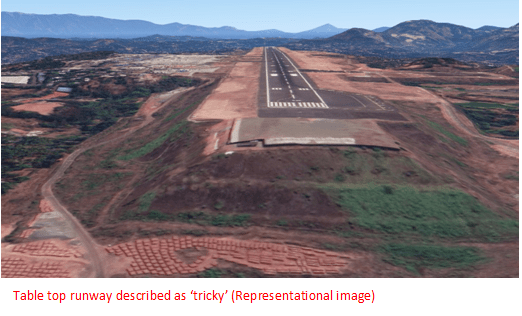 A Calicut-bound Air India Express flight with 104 passengers on board made a precautionary landing at the Trivandrum International Airport at noon on Friday due to a technical snag in the hydraulic system of the aircraft.

The 737-800 Air India Express Boeing flight from Sharjah to Calicut was diverted to Thiruvananthapuram after the pilot received a technical snag indication in the cockpit, according to aviation sources.

Following the indication of a snag in the aircraft while flying over the Arabian Sea, the pilot decided not to land at the Calicut airport where the length of the tabletop runway was relatively low against the total runway length of Trivandrum or Cochin international airport. .

All the passengers are safe and were deplaned from the aircraft.

The airline has also made all necessary arrangements to accommodate passengers in another flight. The aircraft took off from Sharjah by 7 am and it was to land at 12.40 at Calicut.

An aircraft of the Air India Express had overshot the runway while making a landing at the Calicut International Airport killing as many as 21 people a few months ago. The cause of the accident has not been made public so far though an inquiry was ordered by the civil aviation department.