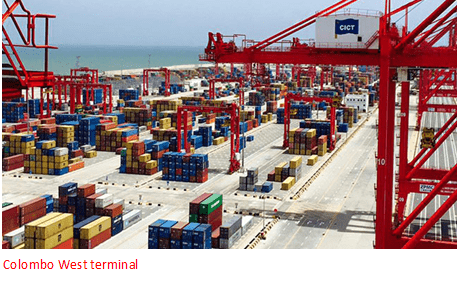 Notwithstanding the volte face by the Sri Lankan by going back on the agreement to hand over Colombo east terminal, India is still keen on having a foothold in Colombo port and is keen on working out a government to government deal to take over the Colombo West port and develop it from a scratch

The Colombo transhipment hub moves a large portion of India’s export-import cargo containers from east coast ports. Because of this development, the east coast ports mostly in Tamil Nadu have been downsized to become feeder ports depending upon Colombo port for their cargo movement to liner vessels. Liner vessels have started skipping Tamil Nadu ports and drop the Indian cargo meant for the east coast at Colombo.

While withdrawing from the agreement entered into with India on handing over Colombo east terminal, Sri lanka had come out with a new offer to take over Colombo West terminal which has to be developed from a scratch. Indications are that India is willing to accept the Sri Lankan offer provided there is government to government agreement. India wants the island nation to give in writing its offer to allow the handover of Colombo west terminal

Industry leaders are concerned over the increased cost if India's exports continued to be routed through Colombo since it involved additional cost of transshipment at Colombo. They are also concerned that the ports in southern India will become permanently feeder ports and dependent on Colombo for survival.