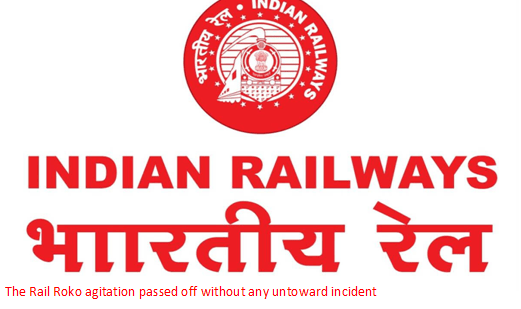 The nation-wide “Rail Roko” called by some farmers’ organisations on 18.02.2021 had minimal or negligible impact on train operations.

In all 30 Mail trains were affected out of total 12800 trains run by Indian Railways (including goods and passenger trains). Several other trains were able to make up time, some of the long distance trains which were yet to reach destination were expected to make up time further.

Suburban services in Mumbai in the State of Maharashtra were not affected by the Rail Roko Agitation. Freight trains and freight revenue were also not affected.

The Rail Roko agitation passed off without any untoward incident.

Train Movement in all the zones was smooth after the agitation. Majority of the zones did not report a single case of any stoppage of train by the agitators.

While dealing with the Rail Roko agitation, utmost patience was exercised by all concerned. As reported by some of the Zonal Railways, the Rail Roko Agitation was not done primarily by the farmers like in the State of West Bengal, agitation was called by a political party to highlight the local incident of custodial death of a DYFI student in Kolkata. It was also reported by Zonal Railways that at several places leaders and activists of political parties were taking part along with their supporters. This was also confirmed by visuals received from Zonal Railways.