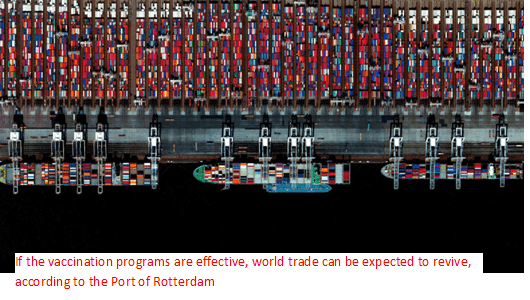 Despite experiencing its biggest decline in volumes in a decade, Rotterdam remained Europe’s largest port in 2020. Like most of the world’s major seaports, Rotterdam’s volumes were impacted by the pandemic, but due to cost saving measures and one-time income items, the port reported an improvement in financial results. According to port officials, Rotterdam remains in a strong position to continue to implement an ambitious investment agenda in the years to come.

While the port expects the recovery in throughput that began in 2020 will continue into this year, they believe that volumes will depend on the speed and effectiveness of national vaccination campaigns. If the vaccination programs are effective, world trade can be expected to revive, according to the Port of Rotterdam. However, given the subdued outlook for economic recovery, they believe it is unlikely that they will return to pre-COVID19 levels during 2021.

The Port of Rotterdam Authority reported a nearly 50 percent increase in net income for 2020 despite a nearly seven percent decline in volumes. During the first half of 2020, volumes were down more than nine percent, but during the second half of the year, the decline decreased to just under five percent. The port experienced its largest declines in iron ore, coal, crude oil, and mineral oil products, although it also experienced a small decline in containers. The only segments that increased were agribulk and biomass.

Port made major progress on the reduction of carbon emissions despite the challenges of 2020.

“In an exceptional year, the port of Rotterdam was fully operational, allowing goods and raw materials to continue finding their way to consumers and businesses,” said Allard Castelein, CEO of the Port of Rotterdam Authority. He went on to note that by working with the government, the business community, and partners, the port however made major progress on the road to a sustainable energy system and the reduction of carbon emissions despite the challenges of 2020.

Among the developments that were highlighted was good progress in the hydrogen chain with the preparations for the installation of electrolyzes, the construction of a central pipeline through the port area, and the gearing up of hydrogen imports. The port is also one of the organizations involved in the Porthos project for storing industrial CO2 under the North Sea.

Among the efforts underway to reduce emissions from ships in the port was an expansion of shore-power capacity. The City of Rotterdam and the Port of Rotterdam Authority work together on the roll-out of shore power for seagoing vessels. In June 2020, the port was also part of the introduction of a battery program for inland shipping operators sailing from Rotterdam.

They are also continuing to focus on digitalization programs to enhance the operations of the port and the interactions between all of the segments in the supply chain.