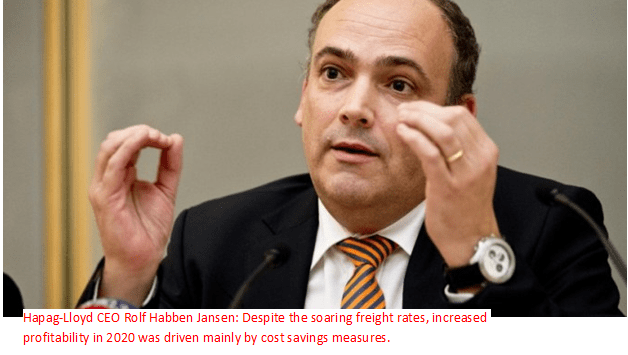 “Every Ship that is Available is Sailing” says Hapag-Lloyd CEO

Container shipping giant Hapag-Lloyd CEO Rolf Habben Jansen candidly said “nobody saw this coming” as “we’ve seen a spending shift from services to goods”, with consumer spending for household products and goods soaring during the pandemic, as funds usually targeted to travel, eating out and events has been diverted to home improvements, medical supplied and fitness equipment, among other, in turn creating one of the healthiest markets for box ships in years.

The good news for the container lines – soaring spot freight rates, historically high fleet utilization, and a bright demand window for the coming year – comes with its fair share of drawbacks, causing operational disruption, too, as on the landside COVID-19 has conspired to create significant congestion and backlogs at major ports globally, which in turn has helped to create a container shortage due to slower turnaround times and imbalances. With delays in transit, scheduling reliability and predictability has suffered too, said Habben Jansen, as there has been a 10% spike (from 26 to 29 days) in the time it takes to get containers back after the’ve been unloaded.

“Everything is sailing that can sail, because time charter rates are going through the roof,” said Habben Jansen, noting that the company has deployed 52 extra loaders/ships to help reposition hundreds of thousands of extra container, while in a ‘normal’ year that number of ships dedicated to reposition “is a single digit.”

Balancing the fleet has always been a challenge premised on the two- to three-year lag between the time a ship is ordered and delivered. In this regard, there will be no relief for the fleet anytime soon, as Habben Jansen reports that the newbuild orderbook compared to the overall fleet size remains low: the current orderbook is just 10% of the current fleet, whereas a ‘he and backlogs at major ports globally althy’ orderbook would be in the 14 to 17% range. New ships ordered today would not enter the fleet until 2023/2024.

The company has just guided for 2021 profits to "clearly surpass" the previous year, when earnings before interest, tax, depreciation and amortization (EBITDA) are seen at 2.7 billion euros ($3.3 billion), more than a third above 2019 levels.

Despite the soaring freight rates, Hapag-Lloyd’s chief officer said that increased profitability in 2020 was driven mainly by cost savings measures enacted at the start of the pandemic when cash burn was high and confidence in future markets was  unsure, and noting that the rapidly rising rates are being seen in the spot market, which is only about 20% of the cargo.