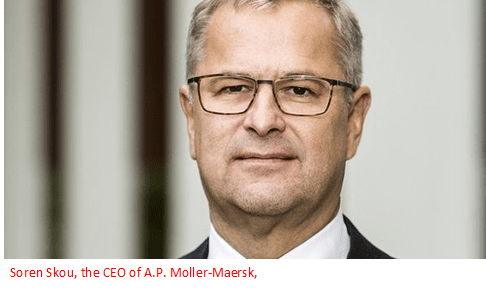 Six cents per pair of sneakers: what consumers will pay for shipping to go green

What will be the cost to consumers of shipping going green? About six cents per pair of Vietnamese made running shoes, according to the boss of the world’s largest container line.

Interviewed by the BBC on Friday, 19 Feb 21 Soren Skou, the CEO of A.P. Moller-Maersk, discussed shipping’s decarbonisation path on the back of last Wednesday’s big announcement that Maersk would operate the world’s first carbon neutral, methanol fuelled boxship in 2023.

Skou acknowledged the shipping industry as a whole would have to spend billions of dollars transforming the global merchant fleet but the cost for the end consumer would be minimal.

“It would in a container with sneakers from Vietnam, translate into something like six cents per pair of sneakers. So I don’t think that it will really impact the consumption opportunities for consumers out there,” Skou told the BBC.

At least $1trn of capital investment in land-based and ship-related infrastructure will be required to halve international shipping’s greenhouse gas emissions by 2050 compared to 2008 levels, as per the mandate of the International Maritime Organization (IMO), a study by UMAS and the Energy Transitions Commission for the Getting to Zero Coalition stated last year.

A slew of polls over the 12 months show that consumers are increasingly willing to pay more for greener products.

“End consumers are becoming increasingly concerned about the climate impact of their purchases and willing to pay a premium for sustainable sourcing,” Johannah Christensen, managing director at the Global Maritime Forum, told Splash last year in an in-depth feature looking at cargo owners and their increasing green demands.

In announcing its plans for a methanol-fuelled feeder boxship last week Maersk revealed around half of Maersk’s 200 largest customers have set – or are in the process of setting – ambitious science-based or zero carbon targets for their supply chains, a figure that is rising fast.

Another titan of global business has been discussing green shipping costs of late. Bill Gates, the Microsoft founder, has a new book out entitled How to Avoid a Climate Disaster. Promoting it today, Gates wrote an op-ed in the Financial Times in which he noted merchant ships run on a fuel that costs about $1.29 per gallon in the US.

“The clean versions of this fuel cost between $5.50 and $9.05 per gallon, depending on how they’re made — an increase of between 300 and 600 per cent. No shipping line is going to voluntarily increase its fuel costs by such a huge margin,” Gates wrote