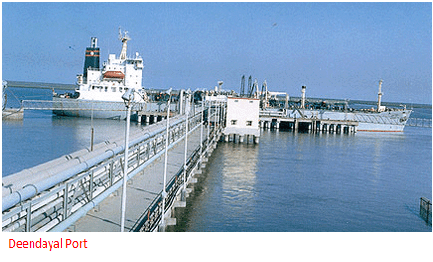 The Board of Trustees of the Deendayal Port (Kandla) took up for consideration Development of a container terminal at Tuna Tekra under Public Partnership Mode and an Build Operate and Transfer basis.

The board took up for consideration the draft feasibility report for the terminal, Draft conecession agrement and the draft RFQ.

It also took for consideration the development, Operation and Maintenance of container terminal at Berths 11 and 12 of the port on PPP mode and allotment of additional land for additional container yard by KICTPL.

Board considered dredging and covered godowns for storage of agri products

The board also took up for consideration  Dredging in the navigational channel and alongside cargo berths/oil jetties and allotment of covered godowns for storage of agri products.

The meeting also considered the issue of  Exemption of Special Port Service charges on rail-bound/rail-borne cargo passing through the port.

a decision was also taken on awarding the work of construction of jetty for the Coast Guard at Offshore Oil Terminal Department, Vadinar.

The Chairman, Deputy Chairman and Board of Trustees welcomed Mr Arvind Chaudhary, Economic Adviser, Ministry of Ports, Shipping and Waterways, Govt. of India, to the Board of DPT.