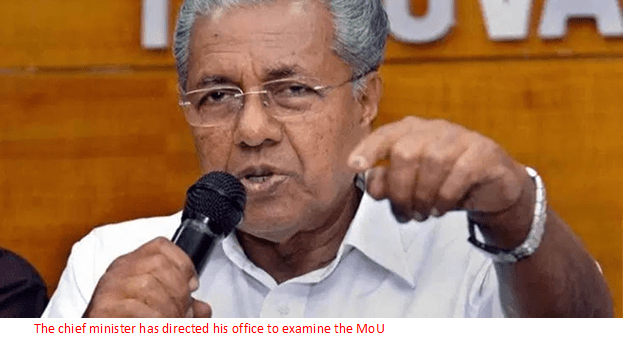 The Rs 2,950-crore project had courted a controversy after Opposition leader Ramesh Chennithala alleged corruption in the deal.

If the Mou against government fisheries policy, KSINC management will be held responsible for it

The chief minister has directed his office to examine the MoU. The scrutiny, it is learnt, would cover the legal validity of the agreement and whether it is against the government’s fisheries policy. If the latter is proved, the KSINC management will be held responsible for it.

Fisheries Minister J Mercykutty Amma also raised concern over proceeding with the project which may lead to protest by the fisherfolk.

Mr Chennithala released two more documents -- the MoU signed at ASCEND 2020 and another on the allotment of four acres of land to the US firm at Pallipuram Industrial Growth Centre, Alappuzha. He claimed that the agreement was not signed overnight, but after holding talks for more than three years.