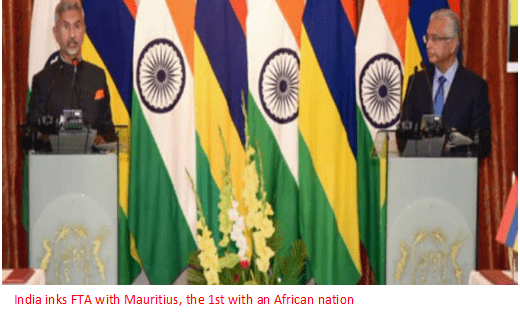 India and Mauritius have signed a Free Trade Agreement the first such agreement India has entered into with an African country.

The Comprehensive Economic Cooperation and Partnership Agreement(CECPA) was signed at the conclusion of the two day visit of External Affairs Minister S Jaishankar to the Indian Ocean Island Nation.

The trade agreement will provide preferential access to Mauritius for the bulk of trade and also for many "aspirational items" in future in the Indian market of over a billion people, Mr Jaishankar said.

These include frozen fish, speciality sugar, biscuits, fresh fruits, juices, mineral water, soaps, bags, medical and surgical equipment, and apparel. Mauritius will get preferential access for the export of 40,000 tonnes of sugar into India at an early time frame.

Similarly, there will also be access for the export of 7.5 million pieces of apparel from the Indian Ocean island. As regards trade in services, India has offered 95 sub-sectors from 11 broad services sectors and this contributes 76 per cent of GDP of the island country.

The External affairs minister said CECPA will surely boost the dynamism of the services sector in Mauritius.

CECPA could facilitate Indian investment in the services sector in Mauritius

"The CECPA could also facilitate Indian investment in the services sector in Mauritius, especially in the ICT sector as Indian companies could benefit by leveraging the bilingual prowess of Mauritius for investments in Francophone Africa," Jaishankar said.

Mr.Jaishankar,addressed the media with the Prime Minister of Mauritius, said India is privileged to have entered the Comprehensive Economic Cooperation and Partnership Agreement (CECPA) with Mauritius.

"This Agreement is India's first-such Agreement with an African country as noted by the Prime Minister. It will provide a timely boost for the revival of our post-COVID economies and also enable Indian investors to use Mauritius as a launch-pad for business expansion into continental Africa helping the prospect of Mauritius emerging as a 'hub of Africa'," he said.

According to another agreement, India to give Dornier aircraft and Advanced Light Helicopter 'Dhruv' on lease to Mauritius

India- Mauritius inked another agreement according which India will provide a Dornier aircraft and Advanced Light Helicopter 'Dhruv' on lease to Mauritius on a gratis basis for two years. An agreement for a special US$ 100 million Defence Line of Credit has was also signed.