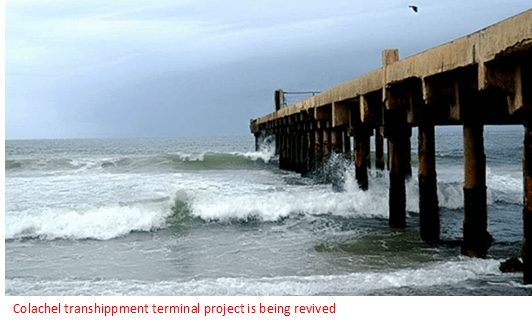 Colachel Transshipment terminal project being revived? Is it a signal to Sri Lanka to fall in line says industry sources

The Six year old Colachel transhipment terminal project for which a foundation stone was laid just before the last lok sabha elections in 2019 is being revived as the Tamil Nadu assembly elections are round the corner with VOC Port Tuticorin seeking an Expression of Interest from Port developers and shipping lines.

Shipping industry sources here said this could also be a signal to Sri Lankan government to persuade them to hand over the Colombo West Terminal at favourable terms to our country.

The tender issued by the VOC Port authorites in Tuticorin announced the intention of the Government of India to build a 6.5 million twenty food equivalent TEU capacity transshipment hub in a place between Kovalam and Keelamanakudi in Kanyakumari coast in three phases.

The investment required is of the order of Rs 27,570 crores to handle 127 million tonnes of cargo annually. Potential bidders have time until March 20 to file their expression of interest

In July 2016, the Union Cabinet accorded in-principle approval for building a new major port at Enayam (westward to Coalchel and located between Helen Nagar and Melakurumbanai village) in Kanyakumari in three phases with an investment of Rs 27,570 crores to handle 127 million tonnes (mt) of cargo a year.

But, following resistance from local fishermen groups, a new site closer to Kanyakumari, nestled between Kovalam and Keelamanakudi villages, was identified

The new site does not have any fishermen villages; both Kovalam and Keelamanakudi villages are about half a kilometer away from both sides. “There will be zero displacement; nobody will be disturbed. Besides, no land acquisition is envisaged for port construction,” said a government official briefed on the plan.

The Maritime India Vision 2030 has prioritised Vizhinjam transhipment port development in the short term (1-3 years) by extending support from Central and state governments. Vizhinjam port has inherent problems in increasing the capacity and hence a bigger port project is being attempted in the Kanyakumari region

Only 25 per cent of Indian cargo transhipment is handled by Indian ports resulting in $80-100 per twenty-foot equivalent unit (TEU) higher cost to exporters and importers for routing their containers through hub ports such as Colombo, Singapore and Jebel Ali.

But the government of India has lacked the political will to implement the project said a shipping industry source. The UPA government had weathered the storm from the same set of fishermen to implement the Kudungulam Nuclear power project and also their expansion.

The share of Indian cargo transhipped in Indian ports should be raised to over 75 per cent by 2030, if the Kanyakumari project took off.