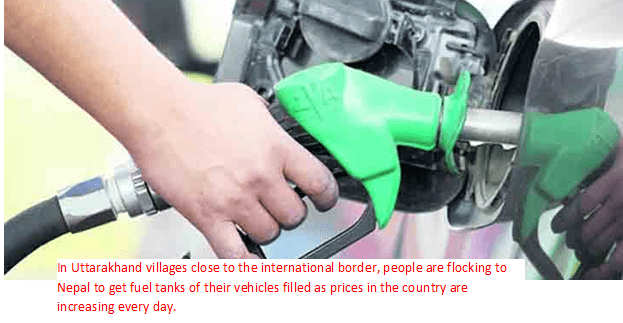 Petrol smuggling rampant in North Bihar from adjoining Nepal. But Kathmandu gets petrol from India

Large-scale smuggling of petrol and diesel has been reported from the Nepal border forcing Nepalese authorities to cap fuel supply. Any vehicle from India in border areas will now be allowed to get only 100 litres of petrol or diesel under the new regulation imposed by the Kathmandu authorities.

Petrol is prices around rs 70 per litre in Nepal while in neighboring India it is sold between Rs 90 to 95 per litre. The huge price difference acts as an incentive to smuggle petrol into North Bihar bordering the Himalayan country. Interestingly, petroleum products are supplied to Nepal by India.

In North Bihar, demand for petrol from local peddlers has shot up in the wake of a steep rise in fuel prices in India. People from Motihari, makes  several trips a day to and from Nepal via Raxaul on his motorbike to fetch petrol from a station bordering the Nepalese district of Parsa.

“Per trip, we bring 5 litres of petrol from Nepal at 113 per litre, which is equal to Rs 70.79 in Indian currency, and sell it for Rs 90-95 on the Indian side,” he said. Dozens of locals owning two and four wheelers are engaged in petrol-peddling. The petrol peddlers make at least rs 2500 a day in the operations across the border

Petrol smuggling is becoming rampant in Bihar districts that share borders with Nepal such as Kishanganj, Supaul, Araria, Madhubani, Darbhanga, Sitamarhi and East and West Champaran.

Uttarakhand people flock to Nepal to fill their fuel tanks

In Uttarakhand villages close to the international border, people are flocking to Nepal to get fuel tanks of their vehicles filled as prices in the country are increasing every day.