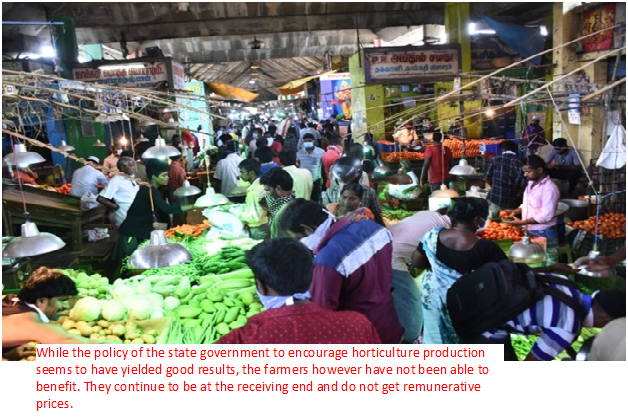 With 420 trucks arriving at Koyambedu (Chennai) daily, the prices of all vegetables have decreased by about 20 per cent. This trend is expected to continue until March 10, during which prices may dip again, said vendors. Chances of prices increasing in this period were very low, they added.

The price of vegetables like beans has decreased from Rs 40 per kg to Rs 20 per kg. Price of broad beans, cabbage and brinjal is also Rs 20 per kg this week, while radish, turnip and chow chow is Rs 10 per kg.  Onions and small onions are priced at Rs 35 and Rs 120 respectively. The prices of these vegetables are expected to reduce in the next seven to ten days, as supply arrives from elsewhere in Tamil Nadu and other states.

Vegetables cheaper in Telangana  due to  bumper crops in February

Vegetables are cheaper in Telangana as well, particularly in Hyderabad. This is due to the bumper crops in February. There has been a steep fall in the prices of vegetables in Rythu Bazars and other outlets as well.

Despite govt’s encouragement to horticulture production, farmers do not get remunerative prices

While the policy of the state government to encourage horticulture production seems to have yielded good results, the farmers however have not been able to benefit. They continue to be at the receiving end and do not get remunerative prices. Carrot, green chilli, ginger, brinjal, potato and beetroot whose prices had skyrocketed are now available at just Rs 20 to Rs 40 per kg. Tomatoes cost between Rs 5 to Rs 10 per kg and leafy vegetables are sold at just Rs 1 per bunch at all government owned Rythu Bazars.