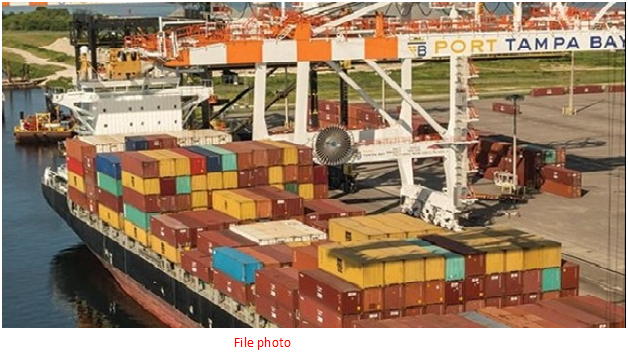 Sentences were handed down 22 Feb 21 in a drug operation that had smuggled shipments of methamphetamine and heroin from Mexico through the Port of Tampa in 2018 and 2019.

According to court documents, federal agents identified seven shipments smuggled in aboard a containership named Leticia operating between Altamira, Mexico and the Port of Tampa and then trucked to Atlanta, Georgia where they were discovered in a private residence along with guns and cash.

Yolanda Herrera, age 43 of Georgia was sentenced to 22 years in federal prison after pleading guilty to conspiracy to distribute and possession with the intent to distribute methamphetamine and heroin. According to prosecutors, she had been hired and paid to coordinate, supervise, and organize the transportation of narcotics sent from Mexico to Tampa, and deliver them to Georgia. Two co-conspirators, Nestor Vazquez-Morales and Adan Martinez-Onofre, had previously between sentenced to jail for their roles.

The smuggling operation was discovered by U.S. Customs and Border Protection (CBP) agents at the Port of Tampa in March 2019.

They became suspicious while inspecting a container being offloaded from the Leticia. According to the ship’s manifest, it contained stone blocks, typically used for the building of stone fountains. Agents from Homeland Security Investigations imaged the blocks and later broke the blocks uncovering 14 large packages that had been shrink-wrapped with black carbon paper, which contained more than 50 kilograms of methamphetamine and 3 kilograms of heroin.

The agents later followed to Atlanta a truck that had picked up the blocks at the port and observed the blocks being offloaded from the truck into a private home. Searching the residence agents seized approximately two kilograms of heroin, three firearms, $12,725 in U.S. currency, and one stone block that was identical to the blocks discovered in the Port of Tampa.

Cellphones obtained from the individuals showed that Herrera, who flew from Tampa to Atlanta after the shipment arrived in Tampa, was actively planning and coordinating the pickup of the narcotics from the port to their destination.

Subsequent investigation showed six prior shipments aboard the same ship between October 2018 and March 2019.