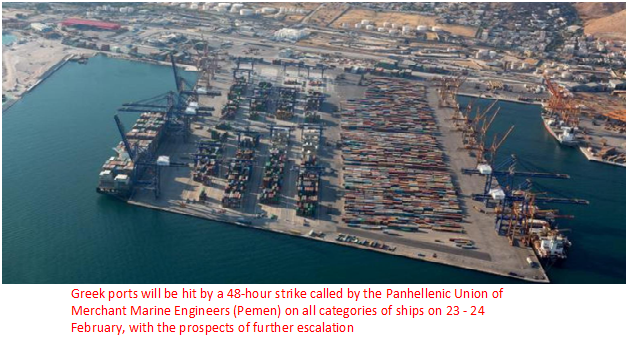 Greek ports to be hit by two-day towage strike

Inside the country’s ports towage service will not be available as the Panhellenic Crew Union of Towage and Salvage has joined the strike from Tuesday, 23 February at 00:01 hours until Wednesday, 24 February at 24:00 hours local time

In a statement announcing the strike action, the Engineers union  charged that although there is a new outbreak of the pandemic there are no substantial measures to protect public health, and that shipowners, the government and the Shipping and Island Policy ministry is seeking to bury social security and the union rights of seafarers.

"Last July, the government introduced and passed Law 4714/2020 in Parliament, which dealt an overwhelming blow to the institution of collective labour agreements in seafaring, while paving the way for these regulations to be extended to all seafarers and all categories of ships," said Pemen.