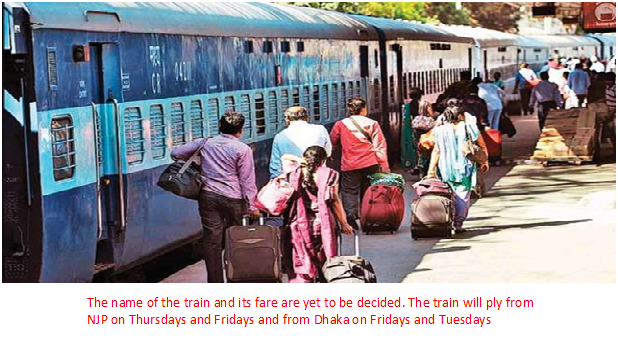 The non-stop passenger train with ten bogeys, between New Jalpaiguri and Dhaka, will cover a distance of 513km. The train will provide connectivity to passengers from Nepal as well since the Jalpiaguri is hardly 20 kilometers away from the Indo Nepal border.

This will also be the third passenger train between the two countries. The other two are: Maitree Express that runs between Kolkata and Dhaka, and Bandhan Express that connects Kolkata and Khulna.

In the high level railway officials meeting, to run the 3rd passenger train was decided on Feb 22

The name of the train and its fare are yet to be decided. Custom and immigration facilities will be provided at New Jailpaiguri  and Dhaka railway stations. The train will ply from NJP on Thursdays and Fridays and from Dhaka on Fridays and Tuesdays

Bangladesh government wanted to run the train between Siliguri, North Bengal’s biggest town, and Dhaka. “But Siliguri didn’t have the required infrastructure, so it had to be NJP instead,” he said. NJP has the biggest railway station in North Bengal and is just 6km away from Siliguri.

The train service could bring usher in tourism as tourist spots like Darjeeling and Sikkim are very close to New Jalpaiguri. Sikkim is just five hours drive while the hill resort darjeeling is about fifty kilometers away.